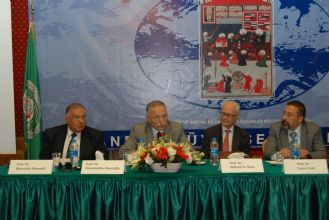 In cooperation with the Metropolitan Municipality of Istanbul, a conference on “Astronomers in Islam and their contribution to world history of science” was organised on 7-8 May 2010 at IRCICA. The Secretary General of the OIC Prof. Ekmeleddin İhsnaoğlu and the Metropolitan Mayor of Istanbul Arch. Dr. Kadir Topbaş were present at the opening ceremony at Çit Qasr, Yıldız Palace.

The conference was attended by historians of science from Europe, Kazakhstan, Syria, and Turkey. In his welcoming address the Director General of IRCICA Dr. Halit Eren recalled that the conference was planned within the framework of the International Year of Astronomy celebrated by the UN and that events related to the Year continued, in Turkey and elsewhere. He underlined the objectives of the meeting pointing out that celebration of the 400th  year of the use of the telescope by Galileo would be incomplete without paying tribute to the astronomers of Islam whose works made a contribution to European science. Dr. Eren outlined the Centre’s activities in the field of history of science in Islam, especially the long-term programs that were launched from the 1980s onwards under the direction and editorship of Prof. İhsanoğlu.

The Mayor of Istanbul Dr. Kadir Topbaş expressed his pleasure to see Istanbul increasingly host significant academic and cultural events. In its 8500-year old civilisational history and its 15000 year-old history as a place of settlement, Istanbul hosted important scientific developments, and particularly in this context, he referred to the observatory that was built on the European side by the Ottoman astronomer Taqi el-Din. He paid tribute to the astronomers in Islam. He said that these astronomers have duly noted and acknowledged their borrowings from other cultures and sources.

Prof. Ekmeleddin İhsanoğlu, Secretary General of the OIC, expressed his pleasure that the conference was organised with the cooperation of the Metropolitan Municipality of Istanbul. He renewed his gratitude to Architect Dr. Kadir Topbaş, Mayor of Istanbul, for his support of international academic and cultural events in general, and those of IRCICA in particular. He said that “under Dr. Topbaş’s Mayorship the city of Istanbul has become a world metropolis, and he has also played a role in the selection of Istanbul as a joint European Capital of Culture 2010. This is an acknowledgment of the historic role Istanbul has played for millennia as the capital of successive civilisations of western and eastern origin.” The Secretary General commended IRCICA for successfully carrying out with its research programs on history of science. He expressed his happiness to be meeting colleagues from various countries, old friends and new friends.

During the working sessions Professor William Shea form Padua University, Italy, spoke of “Galileo’s Discovery of A New World in the Heavens: A Step Along the Route Opened by Islamic Astronomers and Scholars”; Dr. François Charette from the University of Frankfurt presented a study on“Astronomy and its Practitioners in the Mamluk Sultanate”; Prof. Atilla Bir (Istanbul Technical University) and Prof. Mustafa Kaçar (Istanbul University) presented a paper on the Turkish Astronomer A. Z. Akbulut and his book on the Quadrant; the paper by Prof. Jan P. Hogendijk from Utrecht University was on “Three Instruments for Finding the Qibla: Islamic Astronomy or European Cartography?”; Prof. Moustafa Mawaldi from the University of Aleppo focused on “Mathematicians and Astronomers in the Ottoman Period: Astronomical Madrasa of Qadi Zada al-Rumi”; Prof. Yavuz Unat from Kastamonu University spoke of "Islamic Astronomy and its Effects on the West"; Dr. Laura Yerekesheva from the Institute of Oriental Studies, Kazakhstan, spoke of “Science and Religion: Medieval Islamic Scholars and Astronomers in Central Asia”. Discussions followed the paper presentations.