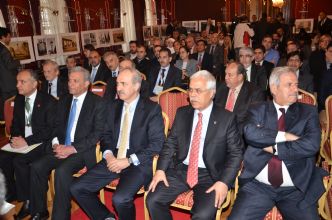 Conference on “Preservation of Islamic heritage of Al-Quds” held at IRCICA – Istanbul, 28 November 2014

An international conference on “Preservation of Islamic heritage of Al-Quds” was organized by IRCICA on 28 November 2014 at its headquarters in Yıldız Palace, Istanbul. The main objective of the conference was to contribute in strengthening international cooperation for the preservation of the Islamic cultural and architectural heritage of Al-Quds. Prof. Numan Kurtulmuş, Deputy Prime Minister of the Republic of Turkey, and Dr. Ziyad Abu Amru, Deputy Prime Minister and Minister of Culture of the State of Palestine addressed the opening session of the conference. The latter heard reports and recommendations that were issued in the context of the historical and architectural studies and workshops program titled “Al-Quds/Jerusalem 2015” being conducted by IRCICA since 2005.

In his opening address, Director General of IRCICA Assoc. Prof. Halit Eren said that the conference aimed at exploring new possibilities of international cooperation for the purposes of recording, restoring and preserving the structures which represent the Islamic identity of Al-Quds and form the legacy of the centuries-long Islamic period in its history. Multiplying efforts for the preservation of this heritage is an immediate need especially in the face of the currently growing attacks and oppressive measures applied by Israel against Muslims’ sacred shrines.

Addressing the conference, the Deputy Prime Minister of Turkey Prof. Numan Kurtulmuş underlined the importance and sensitivity Turkey attaches to the cause of Palesitne and Al-Quds. Stating that the oppressive policies and aggressive actions of Israel which further increased in the recent period are an obstacle to the peace process in Palestine and thus to peace in the Middle East and peace in the world, the Deputy Prime Minister underlined the need for Islamic countries to be more sensitive and attentive than ever on this issue. He reaffirmed that the Republic of Turkey, with its 77 million people regardless of their political orientations, is fully supportive of the cause of Palestine.

Dr. Ziyad Abu Amru, Deputy Prime Minister and Minister of Culture of Palestine, expressed his appreciation to IRCICA for its efforts to help protect the Islamic identity of Al-Quds, assist in its economic development, record and preserve its cultural and architectural heritage. Recalling examples of Israel’s disrespectful and aggressive attitudes towards human, material, religious and all other values and its Israelification policies, he said that international community must urge Israel to end such practices, respect international legitimacy and act in conformity with UN Security Council resolutions.

Prof. İsmail Yüksek, Rector of Yıldız Technical University, spoke on behalf of the rectors participating in the conference. Referring to verses of the Holy Quran, he recalled the significance of Al-Quds for Muslims and the importance of ethics concerning the conservation and use of the holy shrines. He said the conference was being held at a most appropriate time.

Dr. Jukka Jokilehto, representative of the Director General of UNESCO’s ICCROM (International Centre for the Study of the Preservation and Restoration of Cultural Property, based in Rome) briefed the audience on restoration activities conducted by ICCROM at Masjid al-Aqsa and training programs it organizes in the field of restoration.

Ambassador Faris Shawqat al-Mufti, Ambassador of the Hashemite Kingdom of Jordan in Ankara, outlined the efforts made by Jordan since the aftermath of World War I with special focus on restoration and rehabilitation activities conducted in Masjid al-Aqsa and the Dome of the Rock.

The conference continued with working sessions where the report of the 2014 Annual Experts Seminar of IRCICA’s “Al-Quds/Jerusalem 2015” program of research and architectural workshops was presented, followed by exchanges of views and formulation of recommendations.