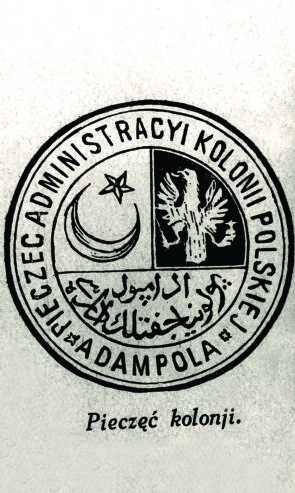 An exhibition titled “Relations between Turkey and Poland in Historical Photographs” was organized by IRCICA in the Polish capital Warsaw, under the auspices of the Ministry of Foreign Affairs of Turkey and with the collaboration of the Warsaw branch of Yunus Emre Institute. The exhibition at the Asia-Pacific Museum and the accompanying album featured 60 historical photographs selected from IRCICA’s archives in commemoration of the 600th year of relations between Turkey and Poland.

The album published by IRCICA shows views shot around the end of the 19th  and the beginning of the 20th century, reflecting a later segment of Ottoman-Polish relations, the beginning of which dates back to the early 1400s. Its explanatory texts are in the English, Polish and Turkish languages.

The exhibition, opened on 23 April, will be on display till 20 May.

The official stamp of Polonezköy (Adampol), the village established for Poles near Istanbul