Home Activities Exhibition of Historical Photographs of Mecca and Medina 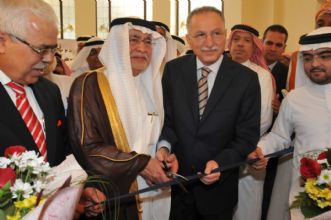 Exhibition of Historical Photographs of Mecca and Medina

More than 100 photographs of the cities of Mecca and Medina were displayed at “The Two Holy Mosques Photograph Exhibition” organised by IRCICA and the Ministry of Culture and Information of the Kingdom of Saudi Arabia. The exhibition was opened in Jeddah on 10 February 2010, in the old Customs building which is used today as a museum. The exhibition was opened for a period of two months and to travel to other cities in the Kingdom.

The photographs, dating from the end of the 19th-beginning of the 20th century, were chosen from the collections of IRCICA including the collection belonging to. On display were photographs of the Holy Ka’ba and many and varied events such as developments relating to the Hejaz Railway and the flood that hit Medina in 1916-18.

Dr. Halit Eren, Director General of IRCICA, said that IRCICA’s photograph archive includes 518 photos of the holy sites at the Two Holy Mosques Mecca and Medina (150 in total), Jeddah, Yanbu Al-Bahr, Tabouk, Abha, and other places in the Kingdom. Among the most important of these collections are the Yıldız photograph collection which includes 232 photographs of these places and the colelction of Fahreddin Pasha, Ottoman army commander and “Defender” of Medina during World War I, which contains 201 photographs.