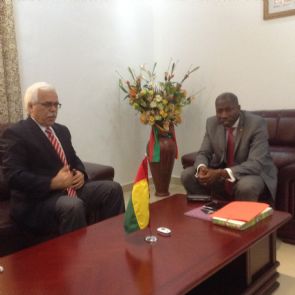 IRCICA Director General Dr. Halit Eren visited the Republic of Guinea-Bissau from 29-30 April 2015, following his participation to the Tenth Session of the OIC’s Standing Committee for Information and Cultural Affairs (COMIAC) in Dakar, Senegal.

In the capital Bissau Dr. Eren was received by H.E. Jose Mario Vaz, President of the Republic of Guinea-Bissau. Dr. Eren briefed the President on the activities of the Centre and reaffirmed IRCICA’s interest in developing further its ongoing cooperation with the cultural authorities and institutions of Guinea-Bissau. The President expressed his support of the Centre’s activities and development of the cooperation.

Dr. Halit Eren was then received by H.E. Mr. Domingos Simoes Perreira, Prime Minister of Guinea-Bissau. The extensive meeting revolved around the areas of cooperation and technical assistance by IRCICA to cultural, scholarly and heritage preservation works in Guinea-Bissau.

Dr. Eren met with H.E. Mr. Cipriano Cassama, Speaker of the National Assembly of Guinea-Bissau. Mr. Cipriano Cassama had visited IRCICA recently, on 17 January 2015, during the period of his participation in the  10th session of the OIC’s Parliamentary Union of Islamic Countries – PUIC held in Istanbul.

Within the framework of his official contacts Dr. Eren was received by the Minister of Foreign Affairs H.E. Mr. Mario Lopes Da Rosa. Another main meeting was with the Minister of Communications H.E. Mr. Agnelo Regala. Each of the meetings appraised past and present cooperation between IRCICA on one hand and the governmental authorities and cultural institutions of Guinea-Bissau on the other.

Another meeting of the Director General was with Mr. Fali Embalo, Secretary General of the Ministry of Foreign Affairs.