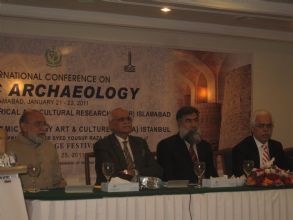 The Congress was organized jointly by IRCICA and the National Institute of Historical and Cultural Research (NIHCR) of Pakistan, on 21-23 January 2011. Experts and scholars of archaeology and leading names from cultural and art centers participated in the conference where subjects such as the rich archaeological heritage of Islamic civilization, archeological research and excavations in Islamic geography and preservation of archaeological heritage were discussed. With the participation of numerous scholars of history, art and architecture, a platform of mutual communion between various disciplines was established.

Director General Dr. Halit Eren, in his inauguration address, briefly touched on their activities and added that IRCICA’s cooperation agreements with various cultural institutions in Pakistan went as far back as 1980s. One of the initial activities was the joint organization of the First International Islamic Artisans at-Work Festival with the Lok Virsa institution of Pakistan Ministry of Culture in 1994. Although Islamic geography harbored numerous states, cultures and communities in its 1400-year history and its archaeological heritage reflected Islam’s characteristics and cultural interaction, studies and researches have not gone far until today except by institutions of limited scope and through some personal ventures. Thus, the decision to establish Islamic Archaeology discipline as an area of research was taken and the first congress was organized successfully in İstanbul in 2005. During the congress, where the Secretary of the OIC H.E. Prof. Dr. Ekmeleddin İhsanoğlu and numerous Turkish ministers participated, thirty-five papers were presented and a number of recommendations were accepted. The congress approved the decision to hold the second congress in Pakistan, where the region teemed with archaeological heritage and the level of education was high.

Dr. Halit Eren concluded his address by thanking the Prime Minister of Pakistan H.E. Syed Yousuf Raza Gilani for his patronage and expressed his appreciation to the Pakistani Minister of Culture H.E. Pir Aftab Hussain Shah Jilani for honoring the inauguration of the congress..

In his speech, Pakistani Minister of Culture H.E. Pir Aftab Hussain Shah Jilani said that Pakistan’s culture relied on the unity that arose from cultural diversity. The people of Pakistan speak different languages, wear different clothes and have different holidays and ceremonies but they are enlightened with the Islamic understanding thus respect humanity. The Minister emphasized that this congress was of vital importance for Pakistan who occupied a special place in the history of Islam and concluded by saying that they were ready to support each and every step to discover and protect Islamic archaeological heritage and pass it on to future generations.