Home Activities IRCICA Participated in the Second Meeting of the OIC Institutions in Jeddah on the Ten-Year Plan for Science and Technology, 14th March 2017 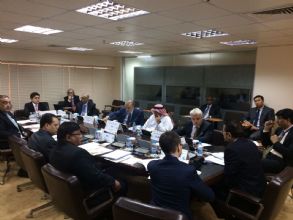 IRCICA Participated in the Second Meeting of the OIC Institutions in Jeddah on the Ten-Year Plan for Science and Technology, 14th March 2017

IRCICA participated in the Second Meeting of the OIC Institutions which was held in the OIC General Secretariat in Jeddah on 14th of March 2017 to discuss and finalize the Implementation Mechanism and Strategy of the Ten Year Plan for Science and Technology. The document was prepared by the OIC Standing Committee on Scientific and Technological Cooperation (COMSTECH) in Islamabad, Pakistan and will be presented for approval at the First OIC Summit on Science and Technology to be held in Astana, Kazakhstan on 10-11 September 2017.

The Meeting was conducted under the Chairmanship of H.E. Ambassador Muhammad Naeem Khan, Assistant Secretary General of the for Science and Technology. Representatives from several OIC subsidiaries and affiliated institutions including IRCICA, SESRIC, IDB, COMCEC, ISF, ISESCO and IAS were present in the meeting. IRCICA was represented in the meeting by Prof. Dr. Sadık Ünay.

During the deliberations, suggestions and proposals by IRCICA on the Ten-Year Plan for Science and Technology focused on the effective use of technology in the cultural realm. They involved potential projects such as formation of joint databases on Islamic cultural and architectural heritage; formation of joint databases and blueprints for the reconstruction of heritage in war-torn areas; formation of digital libraries and museums across the Muslim world; the use of OCR systems in historical research; and preparation of World Heritage List Files through digital systems.