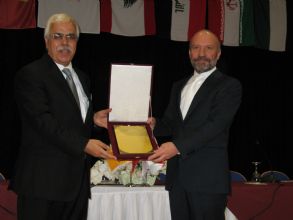 IRCICA and the Institute for Islamic Research and Intercultural Dialogue, Near East University (Lefkoşa/Nicosia, Turkish Republic of North Cyprus) jointly organised an international conference on “Islamic Civilisation in the Mediterranean”. The conference was opened with the message of TRNC President H.E. Mr. Derviş Eroğlu read by the President’s spokesman Mr. Osman Ertuğ.

President Eroğlu referred, in his message, to the history of the Muslim Turkish Community in Northern Cyprus and to the efforts made by the community to preserve its Muslim identity and heritage. He informed the audience about the current situation of the reunification talks over Cyprus and said that Turkish Cypriot side will go in good faith to Geneva for the tripartite meeting planned for January: UN Secretary-General Ban Ki-moon will bring together Eroglu and Greek Cypriot leader Mr. Demetris Christofias in a move to find a solution to decades-long Cyprus problem. The Turkish Cyrpiot President told the Islamic countries that Turkish Cypriots need their support more than ever for a fair and long-lasting solution. He thanked the Organisation of the Islamic Conference for issuing resolutions on the Cyprus issue over the years.

The message of Foreign Minister Mr. Hüseyin Özgürgün was read by Undersecretary Mr. Aytuğ Plümer. The Minister expressed his belief that the conference on Islamic Civilisation in the Mediterranean will throw light on the riches and the depth of this civilization and create a positive environment atmosphere.

The opening ceremony also heard Mr. Hasan Bozer, Speaker of the Parliament of the TRNC, the message of H.E. Prof. Ekmeleddin İhsanoğlu, Secretary General of the OIC, which was read on his behalf by Mr. Bakary Dramé, Assistant Secretary General, and the addresses of the Rector of Near East University Prof. Ümit Hassan and IRCICA Director General Dr. Halit Eren.

OIC Secretary General Prof. İhsanoğlu’s message read by Assistant Secretary General Mr. Bakary Dramé underlined the importance accorded in Islam to cooperation and solidarity and recalled the role played by the Mediterranean region as an environment conducive to civilization. He evoked the various efforts deployed by the OIC to reinforce peaceful coexistence of the different faiths and cultures.

The speaker of the Turkish Cypriot Parliament Mr. Bozer referred to the unjust treatment directed to Muslim peoples around the world citing as example the situation in Palestine and the “embargoes” on the Turkish Cypriots. He said that “If an examination in depth is held, it will be seen that the factor of religion lies in the root of this” and argued that efforts are exerted in the world to cause and maintain Islamophobia. To face this situation the Muslim countries need to further strengthen their cooperation.

IRCICA Director General Dr. Eren said that within the evolution of universal civilization the Mediterranean region assumes a core position: it is the place of origin of all the heavenly religions and the place where cultures and civilisations interacted most closely. It is around the Mediterranean that Islamic civilisation spread, flourished, and interacted with other peoples far and near not only in commerce and finance but in also science and languages. It is also crucial that the growth of Islamic civilisation in this region is one of the main elements that made the Mediterranean a crucible of development and a crossroads of cultures. He outline dthe activities fo IRCICA conducted in this context.

The Rector of Near East University Prof. Ümit Hassan pointed out that the conference was an axcellent platform for the presentation of studies and formulation of new observations and that it would contribute in promotingresearch in this field.

After the opening addresses, the Founding Rector of Near East University Dr. Suat İ. Günsel was presented a Golden Plaque by IRCICA Director General Dr. Halit Eren. The Founding Rector in turn presented plaques to the representative of the OIC Secretary General Mr. Bakary Dramé and the Director General of IRCICA. During the presentation Dr. Günsel said that the university had until then hosted about 4000 conferences but this one was special because it was going to examine “our tissue”.

Two exhibitions were opened on the occasion: selected historical manuscripts from the collections of North Cyprus, and historical photographs of Cyprus selected from the archives of IRCICA.