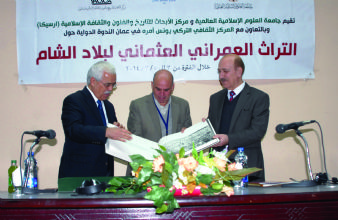 A symposium on "Ottoman Architectural Heritage in Bilad al-Sham" was organized by IRCICA and the World Islamic Sciences and Education University in Amman, on 3-5 March 2014. Around 30 specialists from Denmark, Egypt, France, Italy, Iraq, Kuwait, Jordan, Lebanon, Sweden, Syria, Turkey and Yemen contributed papers and case studies to a review of the history of formation of the largely diverse cultural and architectural heritage of Bilad al-Sham region.

The symposium was held under the patronage of Mr. Nidal Katamin, Minister of Labour of Jordan whose message was read at the opening. Prof. Salah Jarrar, Vice Rector of World Islamic Sciences and Education University and IRCICA Director General Dr. Halit Eren delivered opening addresses.

The participants’ presentations included surveys and case studies of different categories of heritage properties such as mosques, kulliyes (complexes), dervish lodges, public and social structures, gardens and open areas, citadels and various functional buildings constructed on pilgrimage routes, among others, in particular regions including present-day Jordan and Syria or specific cities such as Al-Quds, Aleppo, Damascus, Homs, etc. A book to contain the papers of the symposium is in preparation.

On the sidelines of the symposium, IRCICA displayed a collection of historical photographs of monuments of Al-Quds built during the Ottoman period, compiled from its archives.