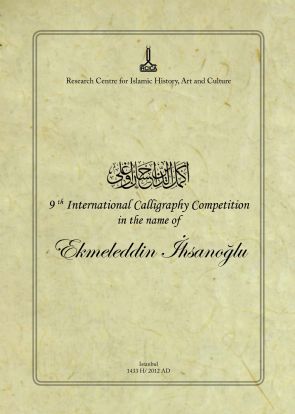 Research Centre for Islamic History, Art and Culture (IRCICA) is pleased to announce the results of the Ninth International Calligraphy Competition which has been organized in the name of Ekmeleddin İhsanoğlu.

IRCICA holds the calligraphy competition periodically within the framework of its activities aiming to preserve and promote the Islamic artistic heritage. The objective of the competition is to preserve, revive and promote the classical art of Islamic calligraphy and encourage young artists to ensure its continuation in accordance with its traditional rules and principles by protecting it from trends emerging outside the original and authentic classical art under influences from outside the Islamic culture. The calligraphy competition is organized once very three years. The Jury of the Ninth Calligraphy Competition met from 15-25 April 2013 at IRCICA’s headquarters in Yıldız Palace, Istanbul to evaluate the works entered in the competition. The Jury members were:

The Jury meeting was opened by Dr. Halit Eren, Director General of IRCICA, and continued with the participation of its above members. The Jury’s honorary members, Master Calligrapher Ahmet Ziya İbrahim and Master Calligrapher Hasan Çelebi were also present. Mr. Said Kasımoğlu, Secretary of the Competition, and Ms. Nurcan Toprak from the Secretariat also participated in the meeting. In his opening speech of the Jury meeting, Dr. Halit Eren, Director General of IRCICA and Chairman of the Competition Organizing Committee, recapitulated the preparatory activities undertaken by IRCICA throughout the last three years in order to realize this competition on a wide international scale.

The Jury examined 900 works submitted by 672 participants from 39 countries which were classified beforehand by the Competition Secretariat. It proceeded in stages of selections, taking into account the rules and conditions of the competition and the minimum quality standards that would be required in an international competition of this scope, until it came up with the best works corresponding to the number of prizes allocated in each category. The awards and mentions distributed are listed in the attached tables.

As will be seen in the catalogue of winners’ works to be published, the Jury focused on precision in writing and discarded entries reflecting trends and practices that stand outside the classical art of calligraphy. It also took into account criteria such as conformity with the rules of calligraphy, creativity in composition, and observance of the conditions of the competition, disregarding negligibly small deficiencies.

The Jury noted that the level of performance in jaly taliq style was not satisfactory and decided to withdraw the first and second awards and the mentions in this category. On the other hand, taking into consideration the high level of some works in the jaly thuluth, thuluth, naskh and diwani styles, the Jury decided to allocate mentions US$750 each in these styles. As seen in the attached liss, the competition distributed 28 awards, 26 mentions and 23 incentive prizes, i.e. a total of 77 awards and mentions,amounting to US$ 129.750 in total, among 73 participants from 23 countries.

The Research Centre for Islamic History, Art and Culture (IRCICA) in Istanbul takes this opportunity to express its gratitude and appreciation to the Jury members, congratulate the winners, and wish success to all participants in the future competitions.

Founder Director General (1980 – Dec. 2004) of the Research Centre for Islamic History, Art and Culture (IRCICA) in Istanbul, and current Secretary General (Jan. 2005 – ) of the Organisation of Islamic Cooperation (OIC). In acknowledgment of his varied activities and sustained patronage of the art of calligraphy since 1980, he is credited with the revival of this art and the stimulation of artistic and official interest in it, not only at the level of the Islamic world but also at global level.

The ninth in the series of competitions, which he had initiated in 1986, is dedicated to him in appreciation of his merits and his gracious support to this activity.

Relating to the art of calligraphy, Prof. İhsanoğlu organized multiple exhibitions of major contemporary calligraphers and had them staged in different parts of the world. He mentored the new generation of calligraphers from different countries, organized training courses for them, revived the tradition of Ijaza “Certification” awarding and staged the first official international Ijaza awarding ceremony for the American calligrapher Mohamed Zakaria, in 1988.

He oversaw the preparation of a reference book on the art of calligraphy and had it published in English, Turkish, Arabic, Japanese and Malay. He also published masterpieces of calligraphy, as well as calligraphy exercise books (mashqs) crafted by leading calligraphers.

He supervised the production of two documentary films on the most prominent calligrapher in the 20th century, namely Hamid al-Amidi (Aytaç), and two among the leading artists in gilding and ornamentation, namely Prof. Tahsin Demironat and Mrs. Rikkat Kunt.

In his activities outside this field, İhsanoğlu served as a faculty member in a number of science faculties, and later became first professor and founder chairman of the Department of History of Science in the Istanbul University. He is also the founder chairman of both the Turkish Society of History of Science and the Foundation for Research on Islamic History, Art and Culture (İSAR). In addition, he served as chairman of the International Union of the History and Philosophy of Science (IUHPS) from 2001 to 2005, and is currently a member of a wide range of international associations, scientific councils and advisory boards of academic institutions, centres, institutes and editorial boards of many magazines in both Islamic and Western countries. Among his publications are a number of books, essays and researches in English, Turkish and Arabic on science and the history of sciences, Islamic culture, Turkish culture, relations between Islam and the West, and Turkish-Arab relations. Many of these works have been translated into other oriental and western languages. He has been the recipient of many medals and decorations from Kings and Heads of State and was awarded honorary doctorates from a number of universities in different parts of the world.

His interest in the art of calligraphy started in his early childhood, at his parental home, his father being endowed with a good handwriting and a pronounced love for calligraphy which he practiced indeed; so much so that he was fond of copying rare books, which he wanted to have among his literary possessions. Thus from his early childhood Ekmeleddin İhsanoğlu was surrounded by many ornate calligraphic paintings hanging on the walls of his home, one of which was the splendid work of the late Hamid al-Amidi, a fragment from a poem by the Ottoman Sultan Ahmed I drawn in imitation of the writing of Mehmed Esad el-Yesarî. Thus he had gained an early interest in calligraphy and sound acquaintance with its state in the Muslim world.