Home Activities The Central Asian Renaissance in the History of World Civilization was held on August 28, 2017 in Samarkand 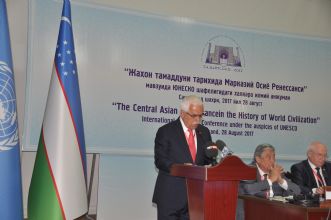 The Central Asian Renaissance in the History of World Civilization was held on August 28, 2017 in Samarkand

Director General of the Research Center for Islamic History, Art and Culture (IRCICA) Dr. Halit Eren participated in the international conference on “The Central Asian Renaissance in the History of World Civilization” which was held on August 28, 2017 in Samarkand, Republic of Uzbekistan. The Director General gave an address at the opening session of the conference which was attended by the Speaker of the Senate of Oliy Majlis (The Uzbek Parliament), the Foreign Minister of Uzbekistan as well as a host of senior officials, heads of universities and international figures. In his address, Director General stated that “Central Asia has been a cradle of science and learning throughout history. As such, the region has made substantial contributions to scientific developments and the advancement of world civilization by raising eminent scholars and scientists in various fields.” Dr. Eren also stated that “Major schools of thought, world-class research centers and scientific traditions were born in the region, which stood at the crossroads of trade routes and channels of human mobilization. Central Asia has been a major center of trade and inter-cultural relations since antiquity when communities from different ethnic, religious and cultural backgrounds coexisted peacefully. The region played an important role in the transmission of goods and services as well as thoughts, ideas, arts and sciences across societies.“ Noting that the historical experience gained in the region could shed light on existing initiatives to tackle the contemporary problems, Eren concluded his speech by pledging to contribute to the global struggle to reduce all forms of radicalism and anti-Muslim extremism.
After the Opening Session, Director General Dr. Eren presented the Harameyn photo albüm prepared by IRCICA to the Speaker of the Senate of Oliy Majlis, Dr. Nigmatilla T. Yuldashev, to be delivered to HE President of Uzbekistan Shavkat Mirziyoyev.