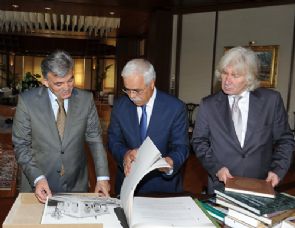 Dr. Eren presented H.E. the President with information on latest developments in the actvities and with samples of the resulting publications. Among the recent publications which were brought to the attention of President Gül were the facsimile editions of oldest copies of the Holy Quran, the editions of the album of historical photographs of Al-Quds in different languages, an album of photographs of the heritage city of Bursa selected from the Centre’s archives, among others. Dr. Eren expressed his gratitude to the President for the continuous support extended to IRCICA’s activities by the host country the Republic of Turkey. President Gül showed keen interest and expressed his appreciation of the Centre’s work and the publications presented.