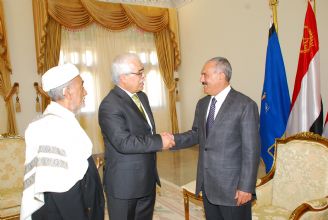 The President of the Republic of Yemen H.E. Ali Abdullah Saleh received IRCICA Director General Dr. Halit Eren on Wednesday 16 December. The audience was in the President’s office at the "Urdi" complex, the restored and renewed old Ottoman general staff headquarters, and took place after the opening ceremony of the history congress titled "Yemen during the Ottoman Era" jointly organised by IRCICA and the National Centre for Archives. The congress was opened earlier that day by Prime Minister Ali M. Mujur for a two-day period of working sessions.

During the meeting, President Saleh was briefed by Dr. Eren on the activities of IRCICA in numerous areas, especially the researches and the congresses relating to the history and cultures of the different regions of the world where Islam flourished over the centuries and left its heritage. The talks focused in particular on IRCICA’s studies on copies of the Holy Quran ("Mushafs") and translations and exegeses of the Holy Quran which constitute important contributions by the Centre to this area of study. Dr. Eren mentioned in particular the facsimile editions of the copies of the Quran attributed to the time of Caliph Othman which were published by IRCICA together with scholarly and comparative studies: the editions of the copy located at Topkapı Palace Museum in Istanbul and the Mashhad Imam Hussein copy in Cairo, respectively. With President Saleh’s approval, the Mushaf which is attributed to the period of the fourth Caliph Ali bin Abu Talib and located in Sana’a will also be published by IRCICA in a facsimile edition to be accompanied, similarly, by a study. During the meeting President Saleh also expresssed his interest and appreciation of the Centre’s activities in general as well as of the cultural cooperation that had developed between the Government of Yemen and IRCICA.