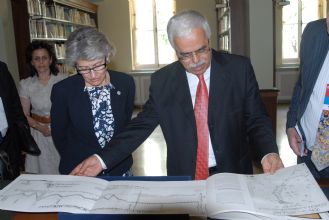 Ms. Irine Bokova, Director-General of UNESCO, visited IRCICA on 22 June 2010. The meeting with Dr. Halit Eren revolved around the coinciding main areas of the two organisations’ respective missions. The Director-General of UNESCO highlighted in particular their engagement in promoting studies and debate on inter-cultural relations and their efforts to encourage education towards a “culture of peace”. She expressed the wish that cooperation between UNESCO and IRCICA can be intensified to contribute in giving more substance to the work each organisation is doing. Dr. Halit Eren, IRCICA Director General, gave examples of the Centre’s research and publications on relations between cultures at the level of “civilizations” and in various “regional” contexts. He expressed the wish that cooperation between the two organisations can increase further around the new projects and programs that respond to the growing requirements of cultural relations. He said that one of the best examples of ongoing cooperation is the joint project coordinated by the Ministry of Culture of Turkey, UNESCO and IRCICA to set up “Book Hospital” at Suleymaniye Library in Istanbul for the conservation and restoration of old books and manuscripts. During the same meeting, Prof. Amir Pasic, Head of the Department of Architecture, IRCICA, gave information to Ms. Bokova on the Centre’s architectural and urban studies program relating to Al-Quds/Jerusalem. Ms. Bokova described UNESCO’s work relating to the heritage sites in the region, and there were exchanges of views on architectural and urban preservation issues.

After the meeting, the Director-General of UNESCO and her colleagues visited the library and the research sections of the Centre. Ms. Bokova was in Istanbul to attend the Summit Meeting of the Heads of State of Southeast European Countries on Cultural Corridors (23 June 2010).