Prof. Dr. Halit Eren was born in 1953. He graduated from the Faculty of Islamic Studies, Marmara University, İstanbul, in 1976. He received his Masters degree from the Institute of Social Sciences Department of History, Marmara University in 1989 and the Doctorate degree from the Institute of Turkic Studies in the same university in 1995 and in January 2014 he received the title of (Associate Professor) in the field of Social, Humanities and Administrative Sciences from the Presidency of Interuniversity Council in İstanbul, Turkey.

Prof. Dr. Halit Eren joined the Research Centre for Islamic History, Art and Culture of the Organisation of the Islamic Conference (IRCICA) in 1981 as a senior researcher and Head of the Library and Documentation Department. A few years later he was assigned to the post of Deputy Director General while carrying on with his former duties. He was the coordinator/member of the IRCICA Congress Organizing Committee responsible for Caucasia, Central Asia and the Balkan countries. He participated in the Islamic Summit Conferences, Islamic Conference of Foreign, Culture and Information Ministers and other conferences and committees of the OIC. He was appointed Director General of IRCICA in January 2005 and is currently working in this capacity.

On the sidelines of the Sixth Annual UNAOC Forum, (Bali, Indonesia, 29-30 August 2014), Prof. Dr. Eren delivered a speech at session on “Coexistance of different cultures: examples from history as lessons for the future”.

Prof. Dr. Eren took part at 3rd World Forum on Intercultural Dialogue, (Baku, Azerbaijan, 18-19 May 2015) and presented a speech on “The Role of Art and Heritage in cross-cultural relations”.

He organized the translation and publication of IRCICA’s book “Ottoman State and Civilization” into Russian in 2006 and into Albanian in 2009.

He was instrumental in the publication of the album “Al-Quds in Historical Photographs” (2009) in Turkish, English and Arabic.

Prof. Dr. Eren was the founder and administrator of the Turkish-Islamic Association of England (1979-1981); Member of the Executive Board (1984-1994) and President (1992-1994) of the Central Office of the Solidarity Association of Western Thrace Turks, İstanbul; Secretary General of the Foundation for Research on Islamic History, Art and Culture (ISAR), İstanbul (1990- ); Founding Member of Turkish Society for History of Science (1989- ), Founding member of the Rumeli (Eastern Europe) Foundation for Education, İstanbul (1993- ); Member of the Preparatory Committee of the Seventh Development Plan of Turkey, Ankara (1993); Founding member (1996) and Vice-President (1996-1998, 2002-2004) of the Western Thrace Foundation for Education, Culture and Health, İstanbul; Second President of the Cultural and Solidarity Association of East European Turks (1997-2001); Member of the Executive Board and Second Chairman of the Cultural and Solidarity Foundation of East European Turks (2001- ); Advisor on Balkan Affairs to the Minister of State of the Republic of Turkey (1997). He has been holding down the position of Founding Chairman of the Center for Balkan Civilization (BALMED) since 2007; member of UNESCO International Coordination Committee for the Safeguarding of Iraqi Cultural Heritage (2011).

Prof. Dr. Halit Eren received the degree of Dr.h.c. from Sh.Marjany History Institute of the Tatarstan Academy of Sciences on April 2006 for his contribution to the development of social sciences within the framework of Islamic culture and art, as well as the organization of international projects and establishment of international relationships. An honorary doctorate degree from the Tatarstan Republic Kazan Federal University was conferred on him on 7 October 2010; he was awarded with honorary professorship from UFA Bashkir State University, Republic of Bashkortostan on 22 October 2010. Prof. Dr. Eren was presented with the Russian Federation State Medal on December 2006 for his contribution to the development of Kazan, the capital of Tatarstan and was granted a medal by the Tatarstan Republic Ministry of Culture for his achievements in the field of culture on September 2010. His Majesty Qaboos Bin Said of Oman conferred the Sultan Qaboos Order for Culture, Science and Art of the First Degree on Prof. Dr. Eren in recognition of his contributions to research on Islamic culture, arts, civilization and history as well as his contributions to the development of international cultural relations and institutional cooperation on 22 February 2012.

Prof. Dr. Eren is the Founding Member and Deputy President of the newly established International Union of Turkish-Arabic Dialogue (2013).

Prof. Dr. Halit Eren knows English, Arabic, and Greek and can communicate in Persian and the Slavic languages.

Prof. Dr. Eren is married and father of one daughter and two sons. 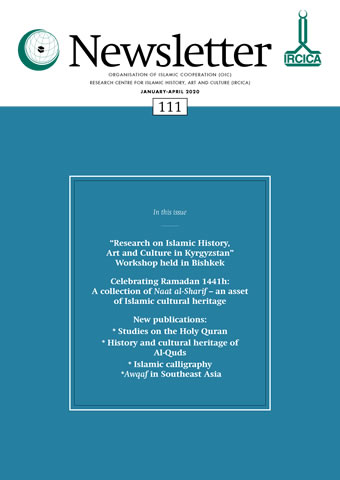