Home News International Conference dedicated to the Memory of Academician Ubaydulla Karimov on “New Perspectives for the Study of Islamic Culture, History and Art in Uzbekistan” organized in cooperation with Al-Biruni Institute of Oriental Studies of Uzbekistan Academy of Sciences 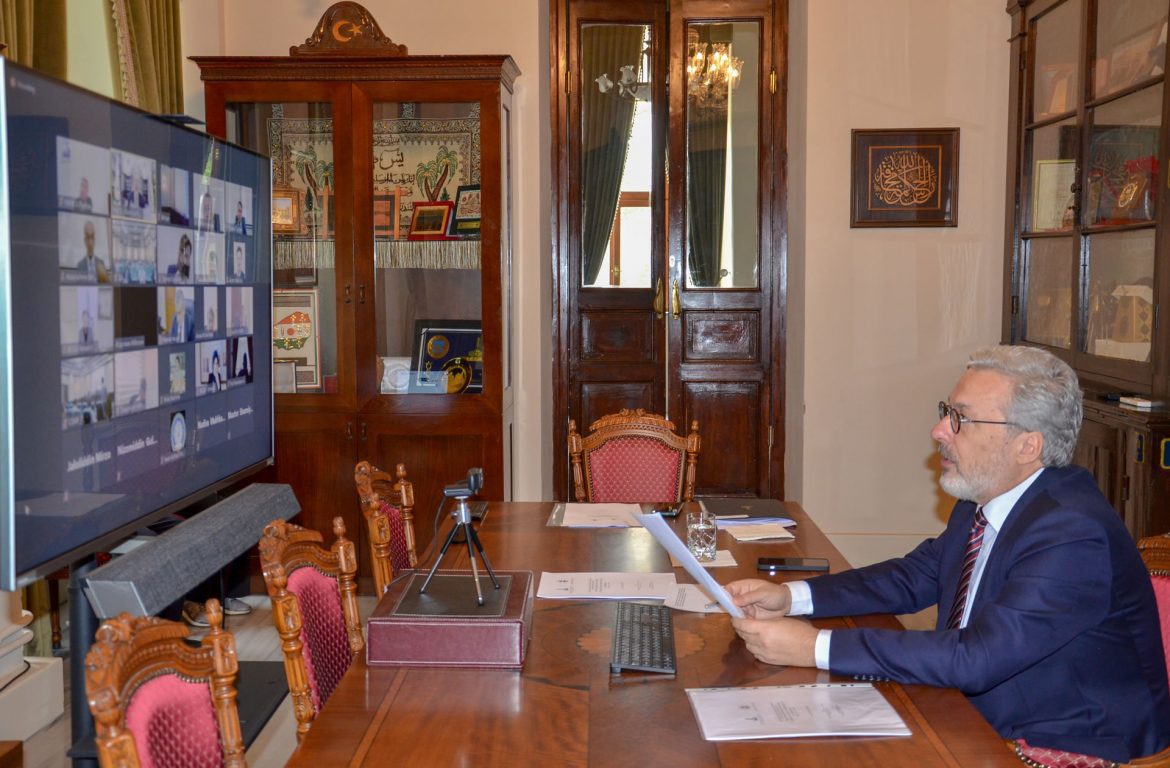 International Conference dedicated to the Memory of Academician Ubaydulla Karimov on “New Perspectives for the Study of Islamic Culture, History and Art in Uzbekistan” organized in cooperation with Al-Biruni Institute of Oriental Studies of Uzbekistan Academy of Sciences

An international conference “New Perspectives for the Study of Islamic Culture, History and Art in Uzbekistan” was organized by IRCICA and Al-Biruni Institute of Oriental Studies of the Academy of Sciences of the Republic of Uzbekistan, Tashkent, on 28 May 2021. The conference was dedicated to the memory of Academician Ubaydulla Karimov. It was attended by scholars and researchers from various countries: Azerbaijan, Kazakhstan, Kyrgyzstan, Russian Federation, Turkey, USA, and Uzbekistan itself. The conference was held online and off-line. A total of 85 papers were presented, in 7 parallel sessions.

In his opening address, Prof. Dr. Bakhrom Abdukhalimov, Director of Al-Biruni Institute of Oriental Studies and Vice-President of Uzbekistan Academy of Sciences, greeted the Director General of IRCICA Ambassador Prof. Dr. Mahmud Erol Kılıç, with congratulations on his taking the office. He recalled an earlier scholarly encounter with Prof. Kılıç relating to studies on Islamic manuscripts. Prof. Abdukhalimov said that preservation and study of the cultural heritage has been one of the priorities of state policy in Uzbekistan. In this regard, in-depth studies on Islamic manuscripts and activities relating to their preservation and cataloguing, are given importance. He evoked the contributions of Academician Ubaydulla Karimov to the research and literature on the works of the great Islamic scholars who were the heroes of Islamic sciences and philosophy. He said that the conference was going to hear papers by senior scholars and also by members of the Society of Young Scholars attached to the Institute; thus it would also serve as a testing ground for their work and a platform for intellectual dialogue.

Ambassador Prof. Dr. Mahmud Erol Kılıç, Director General of IRCICA, delivered an opening address in which he greeted Prof. Bakhrom Abdukhalimov and the other dignitaries attending the opening session and all participants in the conference. He expressed his pleasure that IRCICA was cooperating with Al-Biruni Institute of Oriental Studies of the Uzbekistan Academy of Sciences on the occasion of this conference. He said that IRCICA gives importance to its cooperation with the Republic of Uzbekistan and the other OIC Member States in Central Asia, their academies, universities, and cultural institutions. The Director General said that several conferences are scheduled to be organized by IRCICA jointly with different institutions in Uzbekistan for the coming months. Furthermore, Ambassador Kılıç underlined the importance of studying the cultural and historical heritage of the OIC-IRCICA Member States in Central Asia, underscoring the role and place of this heritage in Islamic civilization and world civilization; he alluded to the numerous outstanding scholars of the region who worked in Islamic sciences, philosophy and mysticism and other fields, who came from diverse fields, almost all fields; Prof. Kılıç also referred to the cultural heritage of the cities, their architectural monuments, libraries, madrasas and cultural institutions. Ambassador Prof. Kılıç thanked the participating scholars and researchers for their interest and contributions.

Welcoming speeches were given by dignitaries. Ambassador Shaazim Minovarov, Advisor to H.E. the President of the Republic of Uzbekistan, Director of the Center of Islamic Civilization in Uzbekistan (Tashkent), and representative of Uzbekistan in IRCICA Governing Board, expressed congratulations to Ambassador Prof. Dr. Mahmud Erol Kılıç on his assuming office at the head of IRCICA. He said that the Islamic cultural heritage in Uzbekistan is part of the heritage of all Muslim countries and it is important that it be studied by institutions such as IRCICA. Ambassador Minovarov underlined the benefits of activities such as this conference which bring together senior and junior scholars.

Professor Zokhidjon Islamov, Vice-Rector of the International Islamic Academy of Uzbekistan (Tashkent), underlined the tradition existing in Uzbekistan to commemorate great scholars by dedicating academic events to their memories; he alluded to the activities of the new generations of scholars in different fields of Islamic studies, particularly the Society of Young Scholars affiliated to Al-Biruni Institute of Oriental Studies and its members participating in the conference. Prof. Islamov praised the cooperation developed between Uzbekistan and IRCICA in the field of Islamic studies.

Professor Raiq Bahodirov, Director of the Center for the Research of Uzbekistan’s Cultural Wealth Located Overseas (Tashkent), alluded, in his speech, to the projects ongoing with the collaboration of IRCICA to locate and record the manuscript works of eminent scholars of Uzbekistan which are preserved in libraries and museums.

The plenary session started with the highlight on “The role of Academician Ubaydulla Karimov’s research in the Oriental Studies in Uzbekistan” presented by Prof. Dr. Surayyo Ubaydullaevna Karimova. Academician Ubaydulla Karimov, to whose memory the conference was dedicated, authored valuable books on the history of science and scholarship. He is known particularly through his studies, translations and editions relating to the fundamental works of illustrious scientists such as Al-Razi, Ibn Sina and Al-Beruni. The plenary session continued with presentations highlighting the historical significance of the region of Uzbekistan and whole Central Asia in the development of civilization, Islamic philosophy, sciences and arts.

The seven parallel working sessions, held in the different halls of the Institute, were grouped under the following themes: History of Islamic Civilization; History; Source Studies; Islamic Studies; Heritage of Islamic Scholars; New Approaches and Views in Philological Studies. At the end of the sessions, certificates of participation were presented by the Institute to the young scholars for their achievements in research. Five diplomas for the best papers were conferred to Khurshid Azimov (Al-Biruni Institute of Oriental Studies), Maftuna Mirzayeva (Tashkent State University of Oriental Studies), Anton Ikhsanov (Higher School of Economics, National Research University), Bekzodbek Mukhtarov (International Islamic Academy of Uzbekistan), and Andrey Kubatin (National Centre of Archaeology). (http://beruni.uz/en-ca/component/k2/item/373-yosh-sharqshunoslarning-xalqaro-anjumani.html)

The conference preparations were coordinated on behalf of IRCICA by Prof. Dr. Ashirbek Muminov, Head of Research and Publications.

The diverse topics that were covered at each session have constituted another representative sample of the vast range of subjects that the field of history of Islamic scholarship, culture and civilization offers for study in the different regions of the Muslim world geography. 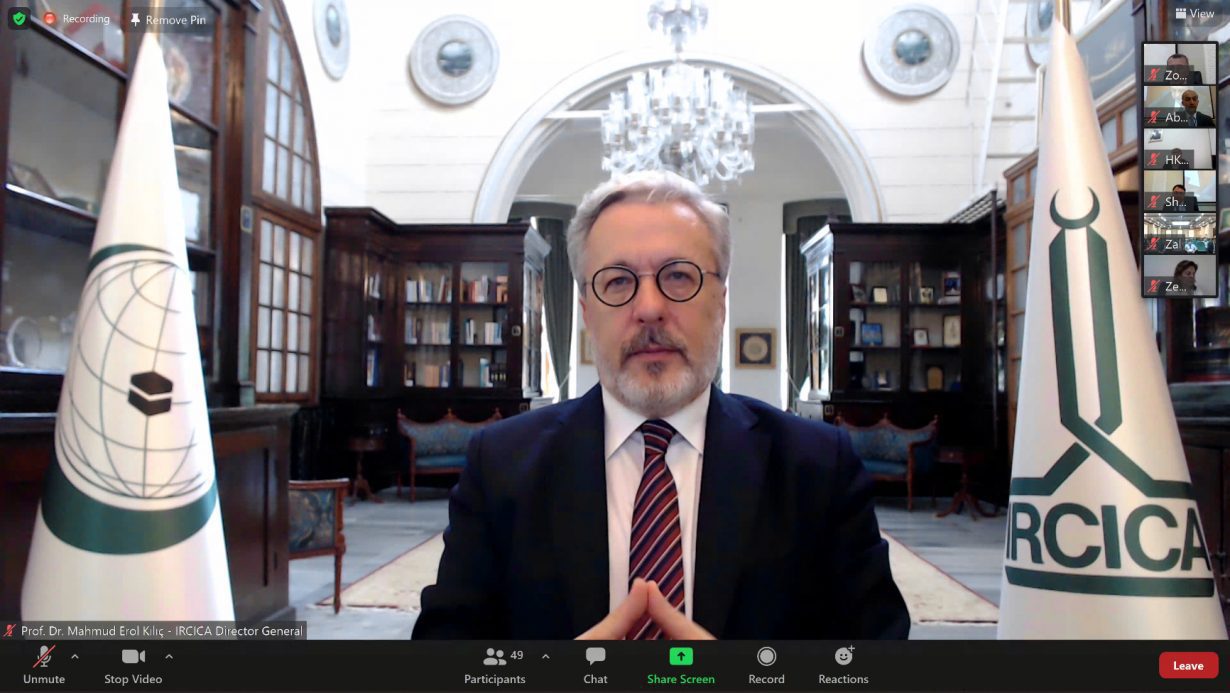