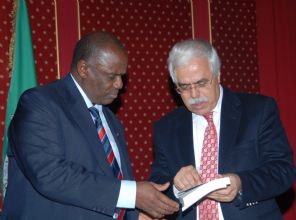 H.E. Mr. Adelino Mano Queta, Minister of Foreign Relations, International Cooperation and Communities, Republic of Guinea-Bissau, and Ambassador Joao Soares da Gama, Ambassador of Guinea-Bissau with the UN were received by Dr. Halit Eren at IRCICA on 12 May 2011. Following the talks on cooperation between Guinea-Bissau’s cultural authorities and institutions and IRCICA and on cultural and educational issues in general, Dr. Eren guided the guest to some of the research departments and to the library where the Minister received information on the collections, especially those on African culture, languages and arts, and the library’s modernisation projects, including the digital library. The Minister showed interest and expressed his appreciation of the Centre’s activities.

The Minister and his delegation were participating in the Fourth United Nations Conference on the Least Developed Countries which took place on 9-13 May 2011 in Istanbul.