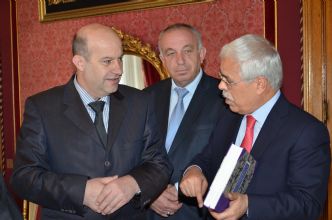 IRCICA was honoured to receive Mr. Rafet Husović, Deputy Prime Minister of the Republic of Montenegro, on 10 April 2013. The Deputy Prime Minister was first received by Dr. Halit Eren at the Directorate General. During the talks, Dr. Eren gave information to the Minister on the Centre’s activities. Afterwards he guided Mr. Husović and the accompanying delegation to the library, giving information on its collections and its services, and to some research departments. Issues of cultural cooperation between Montenegro’s governmental and academic institutions on one hand and IRCICA on the other were highlighted. Some months earlier, on 19 October 2012, Mr. Rafet Husović had addressed the opening of IRCICA’s history congress on "The Balkan Wars (1912-1913) on their Centenary" together with Ministers from four other Balkan countries.