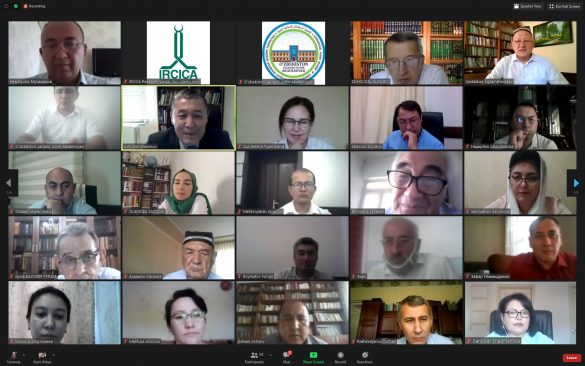 The “IRCICA Chair for Islamic History and Source Studies” was instituted at the International Islamic Academy of Uzbekistan (IIAU), in Tashkent, and launched during the period of the international workshop on “Islamic Studies in Uzbekistan: Achievements and Perspectives” that was jointly implemented by the Academy and IRCICA on 24 June 2019.

Within the framework of the Chair, seminars and lectures are being held on line, PhD studies are being conducted, on topics in Islamic history and source studies.

On June 27, 2020 IRCICA and the International Islamic Academy organized the on-line conference devoted to the 80th anniversary of the Professor of “IRCICA Chair History of Islam and Source Studies” Prof. Dr. Akhadjon Hasanov. Prof. Dr. Halit Eren, Director General of IRCICA, had sent a congratulation letter to Prof. Hasanov, in which he emphasized the cooperation between IRCICA and the Academy contributes to strengthening cultural affinities between Uzbekistan and the other OIC-IRCICA Member States and also creates the basis for further enhancement of ties in the field of academic research. The conference was attended by Prof. Rustam S. Kasimov, Advisor to the President of the Republic of Uzbekistan, Ambassador Shaazim Minovarov, Director General of the Center for Islamic Civilization in Uzbekistan, Prof. Shukhrat Yovkochev, First Vice-Rector of the International Islamic Academy of Uzbekistan, Prof. Nur-Islam Tukhliev, Head of the Encyclopedia of Uzbekistan, and other dignitaries. Prof. Ashirbek Muminov, Head of Research and Publication, IRCICA, took part in the conference with a paper on the topic: “Prof. Hasanov as the Researcher of Early Islamic History”.

A joint session on 25 July 2020 heard the following PhD dissertations: Mirzaev Nasriddin Mukhritdinovich, “Documents About Social Relations Considered by Tashkent Qadi Courts at the Beginnings of the 19th and 20th Centuries”; Joniev Muzaffarkhon Fayzullaevich, “Haj Visits of Uzbekistan Muslims (end of 19th century –1980s of the 20th century)”. The two dissertations were recommended for continuation of the PhD degree process.

On 28 July 2020, IRCICA and International Islamic Academy of Uzbekistan held the on-line seminar on the theme: “Religion, Art and Culture in Central Asia” for the faculty members of the “UNESCO Chair on Religious Studies and Comparative Study of World Religions”. The Lecturer was Prof. Dr. Ashirbek Muminov (IRCICA). More than 30 persons took part in the seminar. The main results of IRCICA’s activities in the study of Islamic history, art and culture in Central Asia were analyzed and described during the seminar.

The activities of the IRCICA Chair continued on 10 August with an online seminar on “Modern methods of research on sources.” The speaker was Prof. Dr. Ashirbek Muminov, as guest professor at the seminar. The latter was attended by faculty members (more than 75 persons) from a number of educational institutions, representatives of various ministries, organizations and agencies, and students. The seminar evaluated the volume of scientific articles in Islamic studies presented at local and international conferences and/or published; it explored the ways of accelerating cooperation in the field, improving the means and methods of educating qualified personnel, effective use of modern methods of research on sources, and competitiveness between educational institutions. Prof. Muminov spoke of the procedures and requirements for research and articles published in international scientific and practical journals, including questions relating to authors’ qualifications, and stressed the need for a thorough mastery of both centuries-old and modern knowledge, while meeting the specific new requirements of research and development. “We live in the era of advanced information and communication technologies,” said Prof. Muminov. “Every industry needs to develop with modern methods over time. Knowledge gained from teachers and life experience gained over the years is important. Of course, the role of talented young people in the development of any industry is important. Reputable higher education institutions and teachers have played an important role in their upbringing. The International Islamic Academy of Uzbekistan is one of the educational institutions with great potential in this area. I think that young scientists have an urgent task to study the scientific and spiritual heritage of the great scientists who have grown up in our countries, to bring it to the attention of the general public and the world. Indeed, there is no doubt that world-renowned great thinkers and scholars, such as Imam Bukhari, Imam Termizi, and Imam Maturidi, will be born and raised in our homeland, and that they will continue to have worthy successors.” Other issues underlined by the speaker included the following: the need for awareness of the procedures for educating young scientists who could compete with their peers in foreign educational institutions, effective use of opportunities and conditions created by the government, in-depth study of the scientific and spiritual legacy of ancestors, resources and their utilization. Issues such as continuous learning and self-training, adopting a critical-analytical approaches, treatment of new findings of research, were also discussed. Scholars and specialists from Uzbekistan spoke about the work being done in their country to access and use the sources of knowledge, and the activities of the funds created to support these processes.

On 12 August 2020, the Chair organized the online seminar with Prof. Rafik Mukhametshin, Rector of the Russian Islamic Institute, Kazan, Tatarstan, Russian Federation. The topic of the seminar was “Jadidism and Reformism in the History of Islam in Russia”. Prof. Ashirbek Muminov took part in the seminar with a presentation on the Islamic Legacy of Shihab al-Din al-Marjani.

IRCICA Chair for Islamic History and Source Studies was opened by the First Vice-Rector of IIAU Prof. Dr. Shukhrat A. Yovkochev and the Director General of IRCICA Prof. Dr. Halit Eren. The same day, 24 June 2019, the Honorary Doctorate of the International Islamic Academy of Uzbekistan was presented by Prof. Dr. Shukhrat A. Yovkochev to Prof. Dr. Halit Eren, in recognition of his valuable contributions to strengthening international academic cooperation and promotion of studies on the history of Islamic scholarship in Uzbekistan. Later on the same day, Prof. Eren gave a lecture for the Academy’s members and students, consisting of an overview and evaluation of the prospects of international cultural and academic relations between Muslim countries.