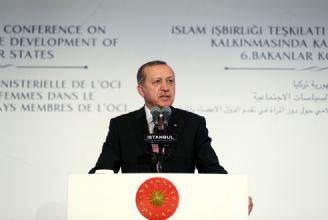 IRCICA participated in the Sixth Ministerial Conference on Women’s Role in the Development of OIC Member States (Istanbul, 2-3 November 2016)

The Sixth Ministerial Conference on Women’s Role in the Development of OIC Member States was opened with an address by H.E. Recep Tayyip Erdoğan, President of the Republic of Turkey in Istanbul, on 2 November 2016. The conference is attended by ministers in charge of women’s affairs in the 56 OIC Member States and representatives of international organizations concerned.

IRCICA Director General Dr. Halit Eren delivered an address during the conference, outlining the projects of IRCICA that aim to enhance women’s cultural and artistic activities. In this regard IRCICA encourages participation of women artists, scholars and other professionals in the international events on arts and traditional handicrafts that it organizes, such as festivals, award competitions and training programs. Furthermore, IRCICA devotes specific activities to themes relating to the role of women in cultural life of Member States. Examples are: the symposium on “The Family in the Muslim Countries and Communities” it organized in 2012, the symposium, accompanied by exhibitions, on “Lady Calligraphers” it held in 2010, the special session on “Lady Artists in the Muslim world” it held in 2014 in the context of the IRCICA International Gathering on Islamic Calligraphy.

On the occasion of the conference, IRCICA organized an exhibition of Calligraphy and Illumination by Lady Artists.