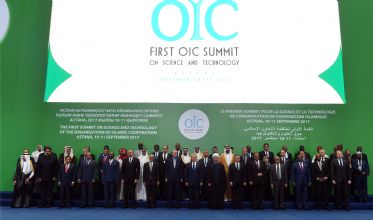 The First Summit of the Organization of Islamic Cooperation (OIC) on Science and Technology was held on September 10-11, 2017

The First Summit of the Organization of Islamic Cooperation (OIC) on Science and Technology at the level of Heads of States and Governments took place in the Palace of Independence in Astana, the capital city of Kazakhstan on September 10-11, 2017. The President of Turkey HE Recep Tayyip Erdogan, in his capacity as the current Chairman of the 13th OIC Summit Conference, President of Kazakhstan HE Nursultan Nazarbayev, President of Pakistan HE Mamnoon Hussain, President of Azerbaijan HE Ilham Aliyev, President of Bangladesh HE Abdul Hamid, President of Mauritania HE Mohamed Ould Abdel Aziz, the OIC Secretary General HE Dr. Yousef A. Al-Othaimeen, Director General of IRCICA Dr. Halit Eren, representatives of 56 OIC countries and other international and regional organizations took part in the Summit.
Being a high-level platform at which the Heads of State and Government discussed scientific and technical issues for the first time in history exclusively, the Summit is expected to facilitate the creation of a basis for a new scientific and technological agenda among the member states and in Muslim geography. The Summit has adopted the Astana Declaration affirming the commitment of the member states to alleviate poverty, increase the budget for education and join efforts to accomplish the goals envisioned in the OIC 2025 Plan of Action and the United Nations (UN) Sustainable Development Goals.