Home News The 45th session of the Council of Foreign Ministers of the Member States of the Organization of Islamic Cooperation (OIC) took place in Dhaka, People’s Republic of Bangladesh, on 5-6 May 2018

The 45th session of the Council of Foreign Ministers of the Member States of the Organization of Islamic Cooperation (OIC) took place in Dhaka, People’s Republic of Bangladesh, on 5-6 May 2018

The 45th session of the Council of Foreign Ministers of the Member States of the Organization of Islamic Cooperation (OIC) took place in Dhaka, People’s Republic of Bangladesh, on 5-6 May 2018. The session had the theme of: “The Islamic Values of Sustainable Peace, Solidarity and Development.”

The conference was inaugurated by H.E. Sheikha Hasina, Honorable Prime Minister of the Government of the People’s Republic of Bangladesh, with an address laying special focus on the conditions of the Rohingya minority and calling on the OIC to firmly stand in solidarity with the Rohingya people in their quest for security and dignity.
In his statement at the opening, H.E. Dr. Youssef A. Al-Othaimeen, OIC Secretary General, alluded to the multiple and varied issues that place upon the OIC momentous responsibilities. Among these issues the Secretary General pointed to the coordination currently underway between the Governments of Afghanistan and Saudi Arabia to call for an international conference on Afghanistan to be convened in the Kingdom of Saudi Arabia, towards building stability and security in Afghanistan. The Secretary-General underlined the Palestine issue, stating that the years 2017 and 2018 have marked a very difficult stage that has put the Palestinian issue to extreme tests with the world community manifesting an unprecedented incapacity that further aggravates the situation (www.oic-oci.org).
H.E. Mr. Marcel Amon-Tanoh, Minister of Foreign Affairs of Côte d’Ivoire and Chair of the 44th session of the Council of Foreign Ministers, and H.E. Abul Hassan Mahmood Ali, Minister of Foreign Affairs of the People’s Republic of Bangladesh, delivered addresses (www.oic-oci.org).

In their working sessions the Foreign Ministers adopted a large number of resolutions under the major headlines of: political issues, conflicts in the Muslim world, international issues, reform of the OIC, Islamophobia and defamation of religions, the situation of Muslim communities and minorities in non-Member States, the OIC 2025: Programme of Action, humanitarian affairs, legal and organizational affairs, information affairs, economic affairs, science and technology, cultural, social and family affairs, among others. .
Dr. Halit Eren, Director General of IRCICA participated in the session, accompanied by Prof. Dr. Sadık Ünay, Acting Assistant Director General.

Cooperation between the cultural authorities and institutions of the Republic of Cameroon was highlighted during Director General Dr. Halit Eren’s meeting with H.E. Mr. Adoum Gargoum (in the middle), Minister Delegate to the Minister of External Relations in charge of Relations with the Islamic World, Republic of Cameroon.

The meeting with the Minister of Foreign Affairs of the Republic of Maldives H.E. Mr. Mohamed Asim, it was a good opportunity to underscore interest in giving a new impulse to contacts and cooperation between the Maldives and IRCICA. H.E. Ambassador of Maldives to Bangladesh Mrs. Aisha Sham was present during the meeting. 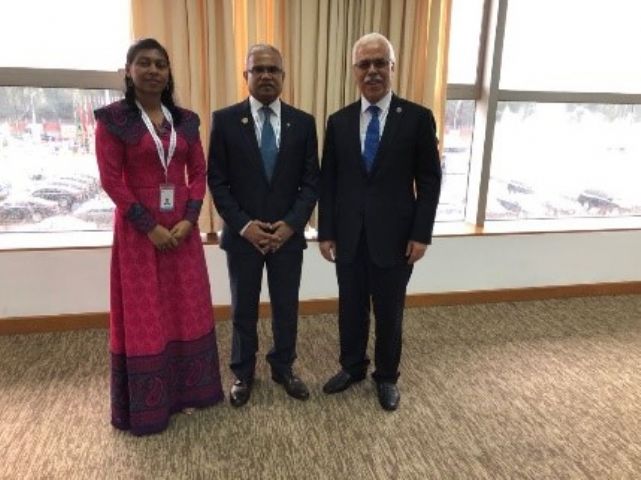