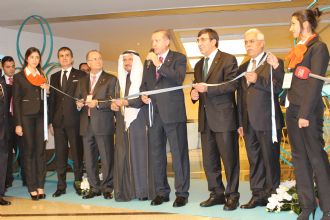 On 27 November, the eve of the Conference on “Preservation of Islamic Heritage of Al-Quds” held at IRCICA, an exhibition of “Al-Quds during the Ottoman period in historical photographs” was organized by IRCICA on the occasion of the 30th Ministerial Session of the OIC Standing Committee for Economic and Commercial Cooperation (COMCEC), at Istanbul Congress Center. The exhibition was opened by the President of Turkey Recep Tayyip Erdoğan after the opening of the COMCEC Ministerial Session. OIC Secretary General Mr. Iyad Amin Madani and delegations attending the COMCEC session were present at the opening of the exhibition.

Photographs selecetd from the Yıldız Palace Albums dating from the reign of Sultan Abdulhamid II were displayed. IRCICA’s publications on Al-Quds and Palestine were also presented on the occasion.