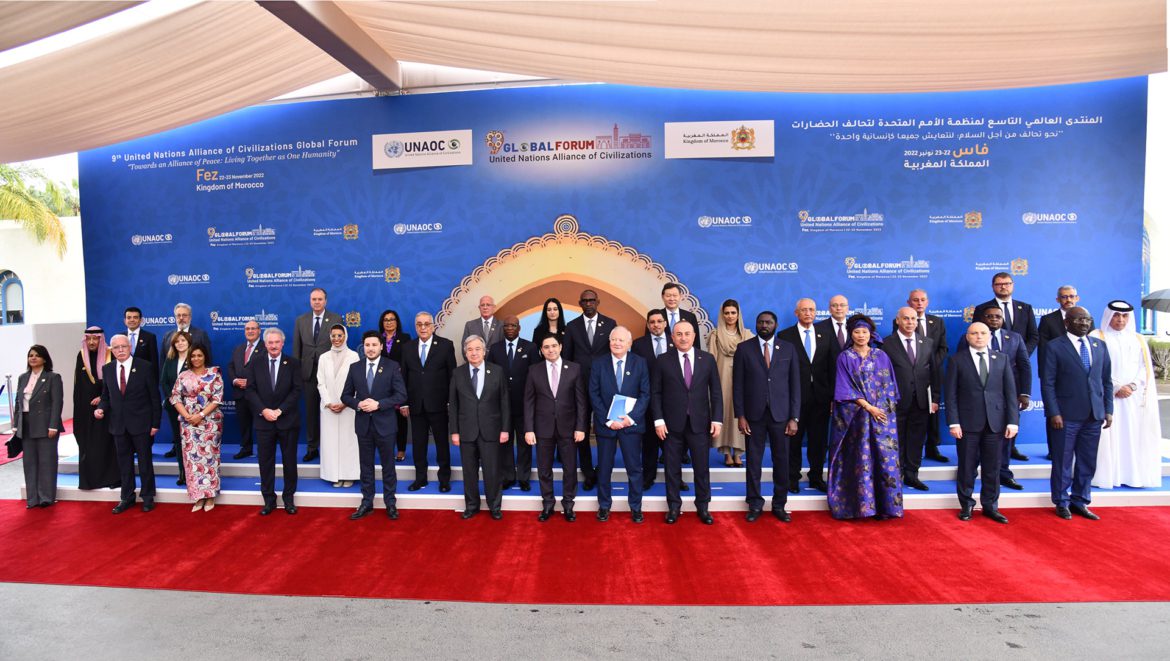 9th Forum of the UNAOC: IRCICA DG addressed the Group of Friends Meeting

The 9th Global Forum of the United Nations Alliance of Civilizations (UNAOC) convened in Fez, Kingdom of Morocco, under the theme “Towards an Alliance of Peace: Living Together as One Humanity”. The Forum was opened with the message of King Mohamed VI of Morocco, emphasizing the importance of finding pathways to peace, unity and solidarity in the current global context marked by “the resurgence of the very causes which led to the creation of the Alliance of Civilizations.” Opening the Global Forum, Mr. Miguel Angel Moratinos, the UNAOC High Representative, asserted that “international conflicts cannot be the sole consequence of religion, culture or civilizations. … There is no clash of civilizations; there is a clash of interests and a clash of ignorance.” Addressing the Opening Session, UN Secretary General Mr. António Guterres called for the creation of an alliance of peace through recognizing diversity as richness and investing in inclusion; “The Holy Qur’an teaches us that God created nations and tribes ‘so that we might know one another,” he said, urging at this time of peril, to be inspired by the essence of these meanings and “stand together as one human family – rich in diversity, equal in dignity and rights, united in solidarity.” Guterres said that the problems, the “what” are known, and what is needed now to solve them is to find out the “how.” (https://www.moroccoworldnews.com/2022/11/352518/un-alliance-of-civilizations-forum-opens-in-fez)

The Opening Session was addressed by the Minister of Foreign Affairs of Türkiye Mr. Mevlut Çavuşoğlu and the Secretary of State for International Cooperation of Spain Ms. Pilar Cancela Rodríguez, representing the two co-sponsors of the UNAOC initiative, Türkiye and Spain. The initiative of founding the UNAOC, which was sponsored by Spanish Prime Minister José Luis Rodríguez Zapatero and the Turkish Prime Minister Recep Tayyip Erdoğan in 2005, was alluded at by various speakers, highlighting the increasing relevance of the foresighted initiative. Delegations from 96 countries participated in the Global Forum, 50 of them at ministerial level. Around 1000 cultural workers, NGO representatives and volunteers took part in the side events and breakout sessions.

Ambassador Prof. Dr. Mahmud Erol Kılıç, Director General of IRCICA, addressed the Ministerial Group of Friends High-Level Meeting that followed. The meeting was addressed by 36 ministers and heads of international organizations, preceded by the UN Secretary General Mr. António Guterres, the Minister of Foreign Affairs, African Cooperation and Moroccan Expatriates of the Kingdom of Morocco Mr. Nasser Bourita, and the UNAOC High Representative Mr. Miguel Angel Moratinos. Professor Kılıç underlined that the chronic problems ranging from poverty and income inequality to religious extremism and discrimination are known and the techniques needed to tackle them available; humankind needs to generate the will and commitment, motivate altruism, reduce polarization, gather collective solidarity, and endeavor towards “Living Together as One Humanity”.

The Forum program included plenary sessions, breakout sessions and side events on a variety of themes of current global relevance, including: “Role of Religious Leaders in promoting peace, mutual respect and social harmony (Interactive discussion between religious leaders from across the faith spectrum)”; “Deep Dive: Efforts in Preventing and Combating Violent Extremism against the backdrop of new and emerging threats”; “Culture: a sine qua non for peace. Museums as places of wonder, discovery, openness to others and dialogue between cultures”; “Balancing migration narratives”; “An Africa with a strong cultural identity, common heritage, shared values and ethics”; “Forging a new Social Contract: Combating discrimination and intolerance based on religion or belief anchored in human rights (with focus on combating Antisemitism, Islamophobia and Christianophobia)”; “Mediation in cultural and religious conflicts: Women, the forgotten peace-makers”; “Global Citizenship Education: Shaping global citizens through transformative education”; “Sport as a vector for peace and inclusiveness”; “Halal and Kosher: Bringing Civilizations Closer Together to Generate Prosperity”; “UNAOC Youth Forum: The future they want: an intergenerational dialogue”; “Reinvigorated Multilateralism through Culture of Peace”; “Countering and Addressing Online Hate Speech on Social Media”.

The Global Forum adopted the Fez Declaration calling for mutual respect, inclusiveness, international cooperation and solidarity among peoples of the world and encouraging the members of the Group of Friends of the Alliance of Civilizations to condemn the unlawful destruction of cultural heritage and religious sites. 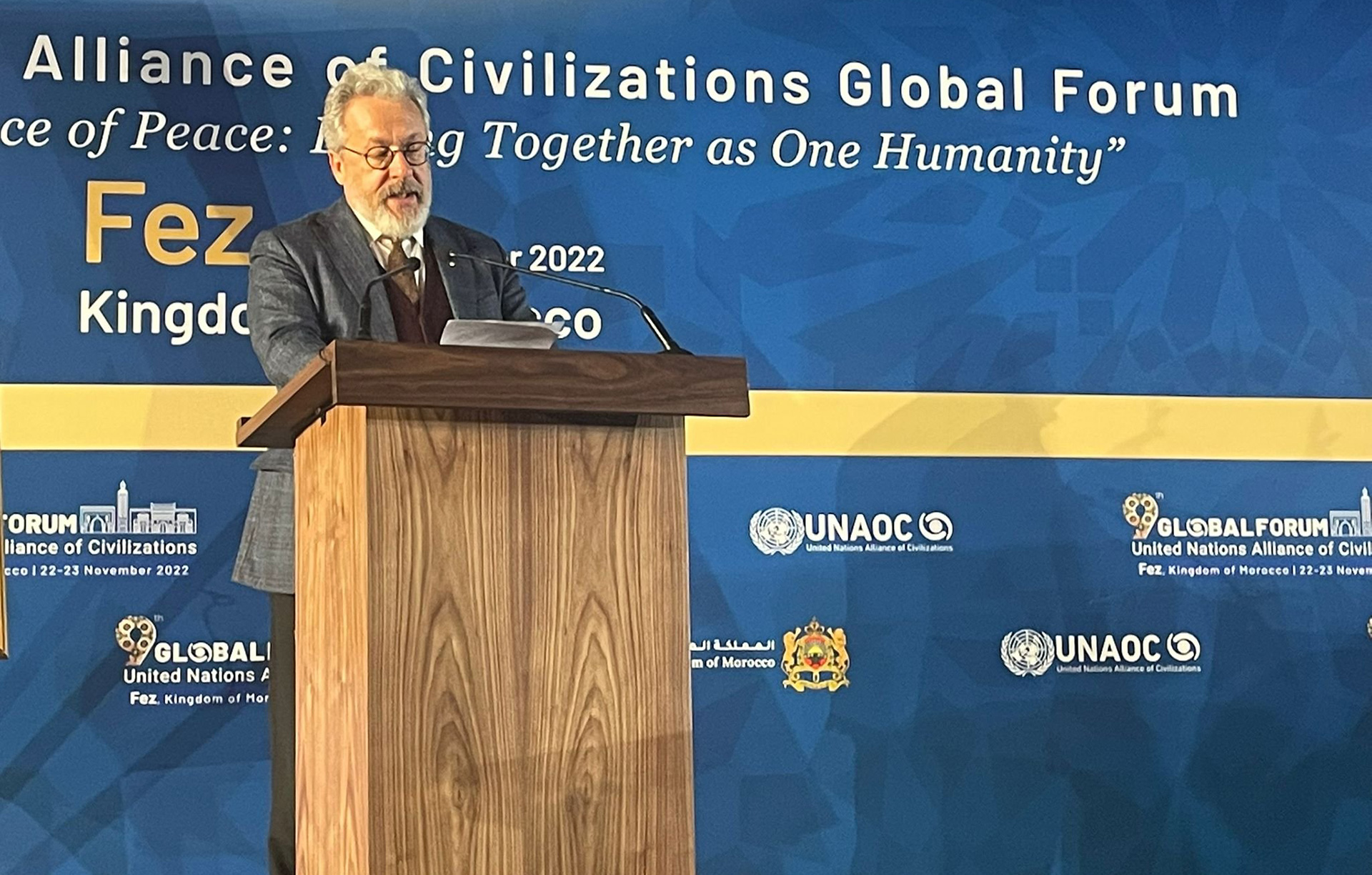