Home ActivitiesConferences Conference on the Golden Jubilee of the Independence of Bangladesh and the Birth Centenary of the Father of the Bangladesh Nation Bangabandhu Sheikh Mujibur Rahman: highlights of Bangladesh’s international relations 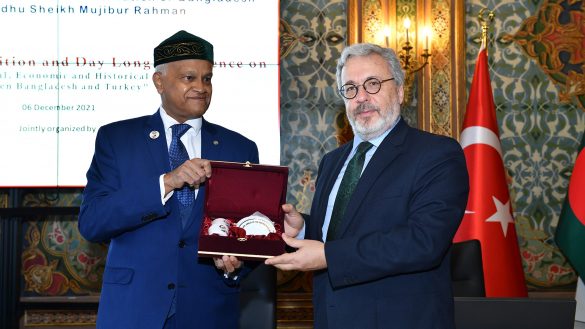 Conference on the Golden Jubilee of the Independence of Bangladesh and the Birth Centenary of the Father of the Bangladesh Nation Bangabandhu Sheikh Mujibur Rahman: highlights of Bangladesh’s international relations

The Embassy of the People’s Republic of Bangladesh in Ankara and the Presidency of Istanbul University jointly organized a commemorative program for the Golden Jubilee of the Independence of Bangladesh and the Birth Centenary of the Father of the Bangladesh Nation Bangabandhu Sheikh Mujibur Rahman, on 6 December 2021. The program consisted of a conference on «Social, Cultural and Historical Relations between Bangladesh and Turkey» and a photography exhibition titled “Bangabandhu and Bangladesh”. A documentary on the life and achievements of Sheikh Mujibur Rahman prepared by the Bangladeshi film director Mr. Shakil Reja Efty was also presented.

The event, hosted by Prof. Dr. Mahmut Ak, President of Istanbul University, was officiated on the Bangladeshi side by Ms. Sultana Afroz, Secretary to the Government of Bangladesh; Ambassador Mosud Mannan, Ambassador of Bangladesh in Ankara; Mr. Mohammad Monirul Islam, Consul General of Bangladesh in Istanbul and on the Turkish side, by Mrs. Özlem Bozkurt Gevrek, Deputy Governor of Istanbul. The event was attended by the Heads of Diplomatic and Consular Missions, university presidents, heads and representatives of business councils. The Director General of IRCICA Prof. Dr. Mahmud Erol Kılıç was invited to the event and also to give an address during the opening of the conference.

The Ambassador of Bangladesh in Ankara, Ambassador Mosud Mannan briefed the audience on the life and political struggle of the “Father of the Bangladesh nation” Sheikh Mujibur Rahman. The Consul General of Bangladesh in Istanbul Mr. Mohammad Monirul Islam spoke of the development of business relations and cooperation between Bangladesh and Turkey. Other speakers appraised the achievements made in various sectors of Bangladesh’s commercial and industrial international relations.

In his address at the conference, IRCICA Director General Prof. Dr. Mahmud Erol Kılıç highlighted the multilateral framework of the OIC and its cultural organ IRCICA which helps to promote cultural relationships between Bangladesh and the other OIC Member States through their presence and participation in IRCICA’s activities. Director General Kılıç underlined the active membership of Bangladesh in the OIC in various areas of the OIC’s activities and gave examples of its cultural and academic cooperation with IRCICA in particular. Some of the outcomes of this cooperation were: the international symposium on “Islamic Civilization in South Asia” organized by the Ministry of Foreign Affairs of Bangladesh in association with Dhaka University and IRCICA in 2008; the establishment of the “IRCICA Chair for Studies on Islamic Civilization” under the University’s Department of Islamic History and Culture in 2018; the session on the history of Islamic waqfs in Bangladesh as part of the conference on “History and Governance of Awqaf in South and Southeast Asia” co-organized by the OIC-affiliated International Islamic University Malaysia and IRCICA in 2018, among others. Currently, other conferences are planned in the context of the IRCICA Chair at Dhaka University. The Director General added that the IRCICA Library has a rich collection of books and articles on the arts, architecture, languages and literature of Bangladesh.