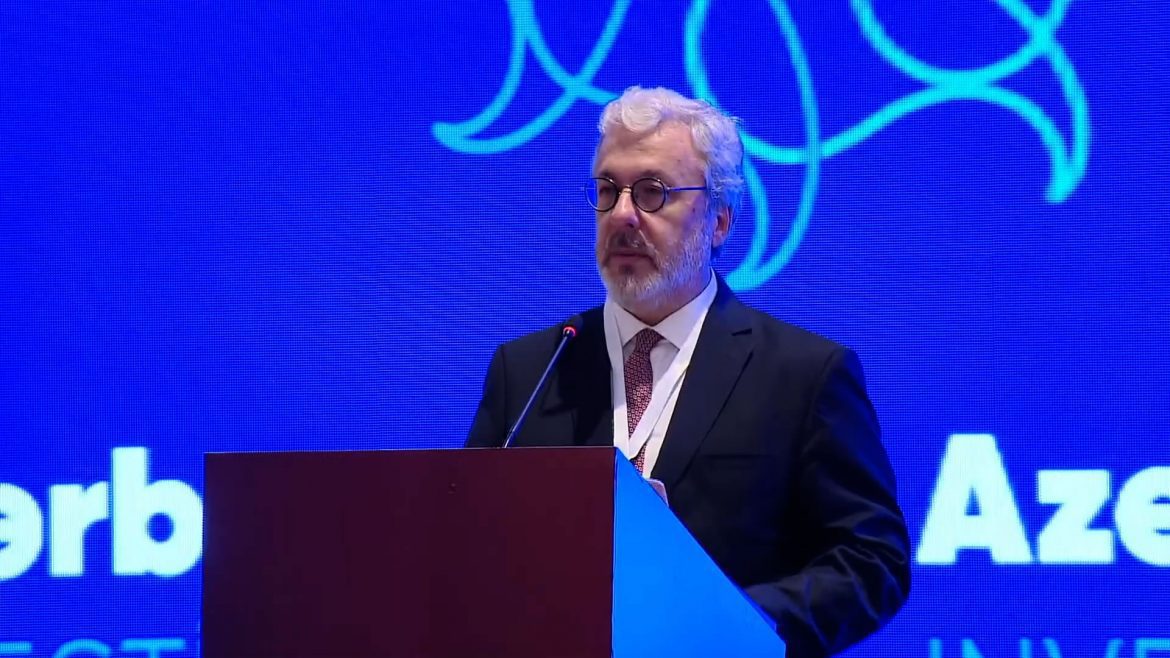 The Director General of IRCICA Ambassador Prof. Dr. Mahmud Erol Kılıç addressed the Opening Ceremony of the Azerbaijan Investment and Culture Summit, which was organized by the Small and Medium Business Development Agency (SMBDA) of the Republic of Azerbaijan and the OIC-affiliate Islamic Cooperation Youth Forum (ICYF), with the support of the Ministry of Economy and the Ministry of Culture of the Republic of Azerbaijan, on 27-28 October 2021, in Baku. Prof. Dr. Kılıç also took the floor in the Panel titled “Main Social and Economic Challenges of the Region: Prospective from Nizami Ganjavi”.

The Summit was dedicated to the 880th anniversary of the well-known Azerbaijani intellectual and poet Nizami Ganjavi. It offered a platform for economic cooperation among the OIC Member States towards enhancing investments in Karabakh region and with focus on promoting youth entrepreneurship. The event brought together ministers, representatives of governmental and non-governmental economic and cultural institutions, international organizations, business and investment circles and youth economic associations from over 20 countries. The sessions were held in hybrid format.

The Director General of IRCICA Prof. Dr. Kılıç evoked, in his address, the role of the cultural environment as a determining factor of international cooperation in general and investment promotion in particular. Outlining the mission and activities of IRCICA that help to reinforce the cultural sphere of cooperation among OIC Member States, the Director General cited as examples, some events conducted by IRCICA jointly with the Republic of Azerbaijan and which cover both the cultural and the economic aspects of development such as the conference on “Karabakh: history and heritage” held in Baku in 2016 and the “Baku International Festival for Crafts” organized in Baku in 2019.

Speaking at the Panel on “Main Social and Economic Challenges of the Region: Prospective from Nizami Ganjavi”, Prof. Dr. Mahmud Erol Kılıç said that references to illustrious intellectuals such as Nizami Ganjavi, who emphasized universally shared human values, contribute to building a conducive environment for cooperation in any area. Prof. Kılıç illustrated this relationship with examples of intra-OIC cooperation projects coordinated by IRCICA that encourage advancements in innovative production sectors such as arts, handicrafts and heritage preservation by drawing inspiration and sustainability from references to the common culture, shared history and civilization of Islamic countries.