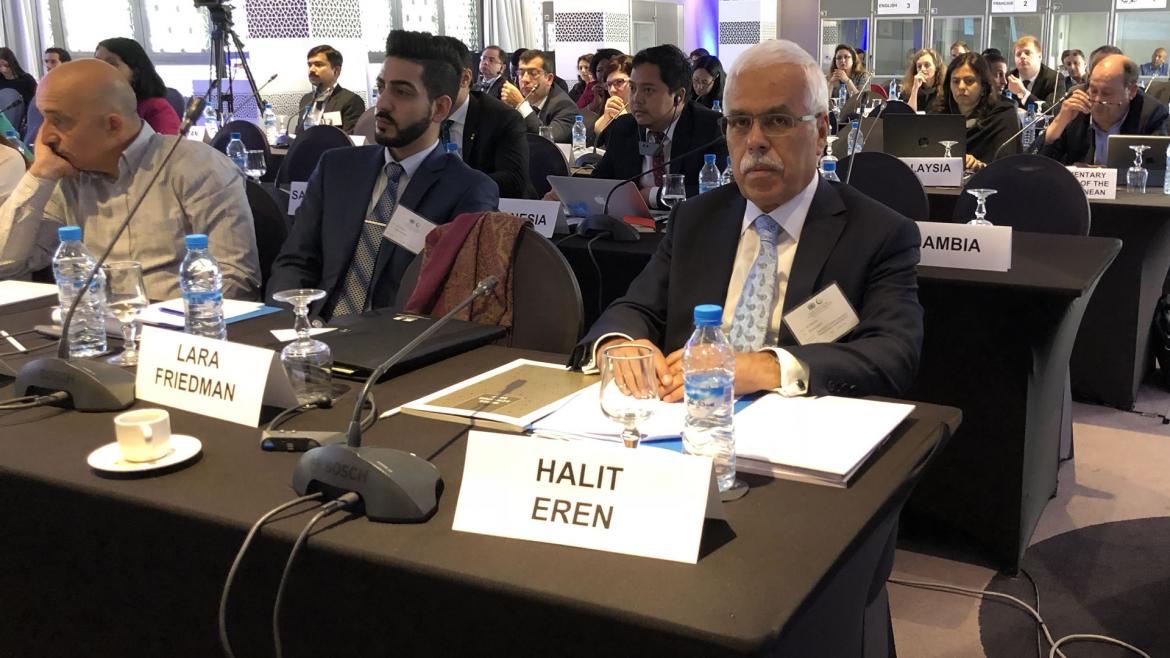 International Conference on the Question of Jerusalem (Rabat, Morocco, 26-28 June 2018) and IRCICA’s participation

The United Nations Committee on the Exercise of the Inalienable Rights of the Palestinian People (CEIRPP) and the Organisation of Islamic Cooperation (OIC) have convened an international conference on the Question of Jerusalem under the theme “The Question of Jerusalem after 50 years of Occupation and 25 years of the Oslo Accords” in Rabat, Morocco from 26-28 June 2018. IRCICA Director General Dr. Halit Eren participated in the conference with an address.

The conference was opened on 26 June with the royal message of H.M. Mohammed VI, King of Morocco and Chair of the Al-Quds Committee of the OIC which was read by H.E. Mr. Nasser Bourita, Minister of Foreign Affairs and International Cooperation of Morocco, at the inaugural session which was held at the Ministry. In this message, H.M. the King have reaffirmed “strong commitment to the Palestinian cause as well as unwavering support and full solidarity with the Palestinian people in keeping with the irreversible pledge Morocco has made to maintain its support until the Palestinian people regain their inalienable rights.” King Mohammed VI pointed to the fact that the session was taking place in a context marked by serious developments, namely the decision of the United States of America to recognize Al-Quds as the capital of Israel and to move its embassy there, which it did officially in May 2018. Alluding to the many conferences held on the subject of Al-Quds as praiseworthy and welcome initiatives, King Mohammed VI stressed that Al-Quds now “needs even greater diplomatic efforts to secure binding international resolutions to protect the City and safeguard its spiritual, cultural and legal character. It also needs action on the ground to promote development in social and humanitarian fields to help Palestinians resist policies of displacement, eviction and expulsion applied against them.”

The working sessions of the conference, which continued at the historical La Tour Hassan Hotel through 27 and 28 June, heard the statements given by: the Assistant Secretary General of the United Nations Mr. Miroslav Jenča, the Assistant Secretary General of the OIC Mr. Samir Bakr, the representative of the State of Palestine Minister Mr. Mohammed Shtayyeh, the Chair of the CEIRPP Ambassador Fodé Seck, the Director of Bayt Mal Al-Quds Al-Sharif, Rabat Mr. M. Salem Cherkaoui and other delegates and international experts.

In his address at the conference, IRCICA Director General Dr. Halit Eren said that Al-Quds underwent the most difficult period of its history and has suffered from increasingly severe destruction since the 1967 war. Israeli settlement policy effected with confiscations and appropriations continued in regular process. Masjid al-Aqsa, which is Muslims third holiest shrine, was undermined with excavations; restrictions were imposed on access to it subjecting people of any faith. Over the decades historical districts were destroyed, life conditions in Muslim quarters deteriorated. Most recently US Embassy was launched in Jerusalem despite widespread condemnation by world community. Dr. Eren outlined the activities carried out by IRCICA, as the cultural research centre of the OIC, relating to cultural and heritage preservation issues in Al-Quds. These activities include research works on tangible facts and documentable aspects of culture and heritage based cultural on first-hand sources. They include studies and publications that highlight the objective history of the region including its Islamic identity component. Another main aspect of IRCICA’s work is the international conferences it organized on the question of Al-Quds bringing together experts from the OIC Member and from UN agencies concerned.

During the period of the conference, IRCICA Director General Dr. Halit Eren paid a visit to Mr. Mohamed Salem Cherkaoui, Director, Bayt Mal Al-Quds Al-Sharif, in Rabat, on 27 June 2018. Views were exchanged on cooperation for the cause of Al-Quds/Jerusalem.