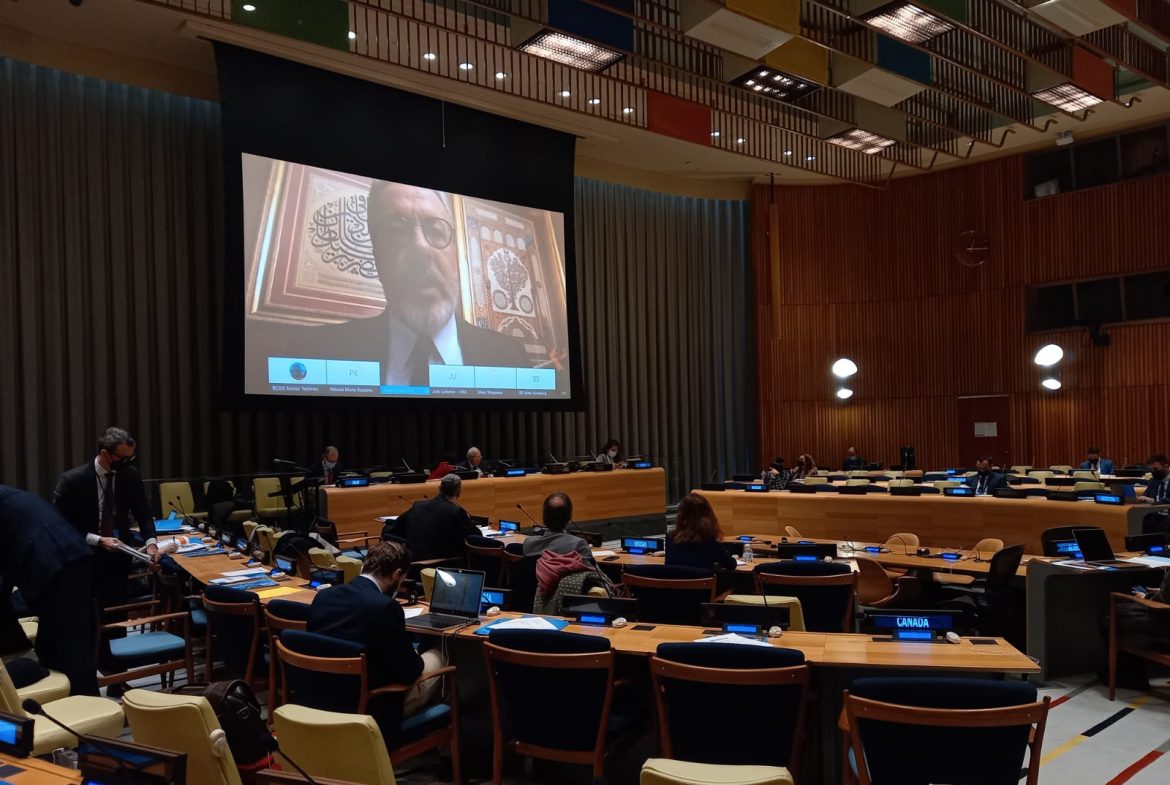 The annual meeting of the Group of Friends of the United Nations Alliance of Civilizations (UNAOC) was held at ambassadorial level, online and in-person in New York, on 8 February 2022. Ambassador Prof. Dr. Mahmud Erol Kılıç, Director General of IRCICA, delivered an address at the meeting, which was attended by the majority of the Group of Friends’ members – 128 states and 28 international organizations, including OIC and IRCICA.

The Group of Friends meeting was opened with welcoming remarks and chaired by H.E. Mr. Miguel Angel Moratinos, Under-Secretary-General, High Representative for UNAOC. The opening segment of the meeting also heard the pre-recorded addresses of H.E. Mr. José Manuel Albares Bueno, Minister for Foreign Affairs, European Union and Cooperation of Spain and H.E. Mr. Mevlüt Çavuşoğlu, Minister of Foreign Affairs of Turkey, representing the two co-sponsors of the Alliance of Civilizations (unaoc.org). The meeting proceeded with the presentation of a report on progress made during 2021 in the implementation of the Action Plan of the UNAOC covering the 2019-2023 period and initiatives envisaged for 2022. The representatives of states and organizations took the floor to express their support and underline the shared priorities of strengthening inter-faith and inter-cultural understanding, inclusiveness and multicultural diversity, combatting extremism and intolerance, respecting the freedom of belief and safeguarding religious sites and worshipers around the world. It was pointed out by many delegates that these objectives acquire pressing importance at times of crisis such as the COVID-19 pandemic.

In his address, the Director General of IRCICA Ambassador Prof. Kılıç said that IRCICA has been a member of the Group of Friends of the UNAOC since 2010 and the two organizations have cooperated fruitfully towards the common objective of promoting cultural diversity and intercultural harmony among peoples of the world. The Director General described the main axes of this cooperation, giving examples of key themes that were highlighted and promoted through the thematic sessions that were co-organized by the UNAOC and IRCICA during the Global Forums of the UNAOC through 2009-2016. He said that these sessions had introduced innovative, pertinent themes to the context of the Alliance, such as: “the role of history teaching as a tool for promoting intercultural understanding”; “images of other cultures in textbooks”; “promoting multiculturalism for preventing violent extremism”. Prof. Kılıç also briefed the meeting on activities that are currently conducted by IRCICA within the framework of the OIC’s 2025 Action Plan and which serve universal goals and priorities in the field of international cultural relations.