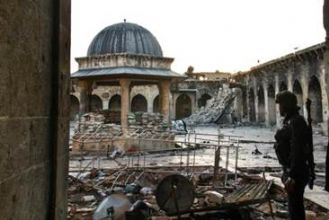 IRCICA participated in UNESCO-WHC Meeting on Post Conflict Reconstruction in the Middle East Context, and in the Old City of Aleppo in particular

A meeting of multidisciplinary experts was organized by UNESCO World Heritage Center (WHC) in Paris, on 18-19 June 2015, to brainstorm on the issue of post-conflict reconstruction in the Middle East context. A special session was devoted to the Old City of Aleppo. IRCICA was represented at the meeting by Prof. Amir Pasic, Head of the Architectural Department. The meeting brought together representatives from UNESCO (WHC, Emergency Safeguarding of the Syrian Cultural Heritage Project, Regional Office in Doha and Arab Regional Center for World Heritage), the Syrian General Directorate of Antiquities, and several institutions dealing with this issue including the German Association of Friends of Aleppo Old City, Stuttgart University, Cambridge University and other universities all dealing with and experienced about protection of cultural heritage in conflict situations and post-war reconstruction, and on the political, social, urban, archeological, architectural and technical aspects of the Middle East. The meeting addressed theoretical and deontological matters, made comparative historical overviews of post-war reconstruction since World War I, and heard case studies.

The first session examined reconstruction processes in Europe after World War II and several case studies on Bosnia and Herzegovina, Jerusalem and Beirut. Prof. Amir Pasic, Head of the Architectural Department in IRCICA, presented the example of Mostar, shedding light on the complexity of a reconstruction process and outlining the findings of IRCICA’s project that focused on Mostar during 2004-2014.

The second session analyzed the existing theoretical framework and international charters in the area of conservation and their relevance in relation with reconstruction. The participants undertook a comparative analysis of the different approaches and discussed the need for a new charter or for recommendations on post-war reconstruction.

The third session was dedicated to the Old City of Aleppo World Heritage site, teh historic center of which has been very severely damaged. For this session, Prof. Amir Pasic and Dr. Ruba Kasmo prepared a presentation illustrating the current condition of the Old City, outlining the main components of a sustainable reconstruction process and the possible actions to be taken by IRCICA in this issue.

The fourth session addressed the conclusions of the meeting in two distinct frameworks of discussion: one dedicated to the Old City of Aleppo and the other to reconstruction in general.

The participants agreed on the importance of IRCICA’s potential action to establish a program combining research, education and training, to be scheduled in the near future. Present and potential activities of IRCICA on the issue include continuous updating of a database for the built heritage in Syria. This work takes into account the various surveys and documentation efforts made through local and international cultural heritage projects in pre-conflict times in Syria. IRCICA’s experience gained through its previous conservation and rehabilitation programs, both on the academic and professional levels, coupled with effective use of the documentation, will help in producing a conceptual framework for rehabilitation of architectural heritage in Syria with a focus on the Old City of Aleppo. The comprehensive scheme IRCICA developed on the subject also includes activities related to training, research and restoration studies.