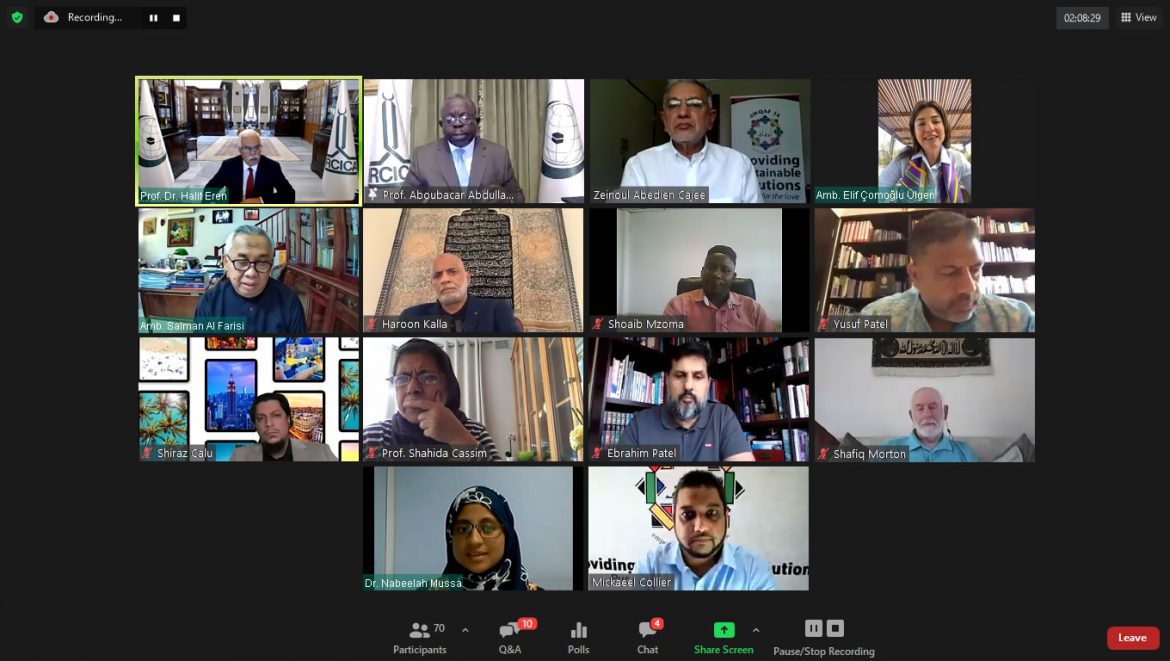 The “Islamic Civilization in Southern Africa” Webinar was executed in two sessions. The plenary session, which was moderated by the Deputy Director of IRCICA, Prof. Dr. Aboubacar Abdullah Senghore, started with the opening address of Prof. Dr. Halit Eren, Director General of IRCICA. In his opening remarks IRCICA Director General Prof. Halit Eren briefly informed the attendees about the IRCICA’s activities on Africa and Center’s longstanding relationship with the Member States’ cultural authorities, universities and organizations and the Muslim communities. These activities resulted in scholarly publications on the history and cultures of Africa and in academic congresses oriented to the different regions of Africa: Southern Africa, West Africa, Eastern Africa and Central Africa. Prof. Eren also evoked the training programs on restoration and conservation of library and archive collections aiming to protect and promote the sources of history studies.

Then the plenary session received addresses of greetings from the Ambassador of Turkey in South Africa Amb. Elif Çomoğlu Ülgen and the Ambassador of Indonesia in South Africa Amb. Salman al Farisi. The Ambassador of Turkey evoked the shared memories in the cultural bonds between South Africa and Turkey, referring in particular to scholar Ebubekir Efendi who was assigned to Capetown in 1862 by the Ottoman Sultan Abdulaziz. The Ambassador of Indonesia emphasized the importance of highlighting the Islamic history and culture in Southern Africa through which come to the fore the ideal values and concepts such as compassion to all human beings and attachment of wider communities to these values; he pointed to the need to reflect on how to translate these values into the realities of the 21st century. Then Mr. Haroon Kalla, CEO of AWQAF SA, delivered an address referring to the characteristics of the Muslim community in Southern Africa in its historical evolution and relations with the Islamic world. On the development of relations with this world, he referred to the Ottoman civilization [which until early 20th century represented the greater part of the Islamic world geography] which he said is thought of as an over-arching “Ottoman Islamic Civilization” that embraces all communities. Mr. Kalla evoked the esteemed figures of the African Muslim community, in particular Usman Dan Fodio.

The working session of the Webinar, moderated by Deputy CEO of AWQAF SA Mickaeel Collier, saw three presentations on the history of Islamic civilization in Southern Africa. The first presentation was made by Dr. Yusuf Patel from South Africa. Dr. Patel talked about the political and economic directions of the Muslim community in South Africa. He described the current status of the Muslim community in statistics, analyzed its commercial activities, educational progress, immigrations; estimating the needs for the future, he recommended the establishment of a research institution on Islamic culture not only for the Islamic community but for society in general. The second presentation was made by Dr. Shuaib Mzoma from Malawi, about the Islamic civilization is Malawi. He reviewed the history of the spread of Islam in Malawi in its successive phases, which began with the activities of individuals and continued with organizations, trusts, and their importance at all times in providing for basic needs, infrastructure, water, sanitary aid, etc. Dr. Mzoma said that Muslims in Malawi enjoy good conditions, the Governments in their various phases have been willing to employ Muslims in public service. The last presentation was a joint presentation by Prof. Shiraz Calu and Prof. Nabeelah Mussa, from Mozambique. It gave an overview of the history of Islam in Mozambique from the pre-colonial era to the present.

The Q&A session followed, with the talks of following scholars as panelists: Dr. Yusuf Patel, Prof. Suleman Dangor, Prof. Shahida Cassim and Prof. Shafiq Morton. Questions were received on a wide range of issues pertaining to the human infrastructure of Muslim communities in Southern Africa: demographic composition, education and manpower training, economic activities; the need for promoting fresh scholarship within and about the Muslim community was underlined. The talks were rounded up, with greetings from Mr. Zeinoul Abedien Cajee, IRCICA’s coordinator to AWQAF SA and conclusion remarks by Dr. Yusuf Patel and Prof. Aboubacar Abdullah Senghore. The Webinar ended with a vote of thanks.