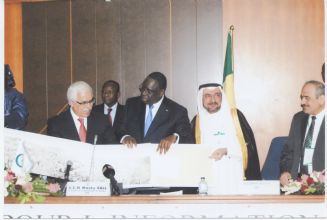 IRCICA’s participation in the 10th Session of the OIC’s Standing Committee for Information and Cultural Affairs (COMIAC), 28-29 April 2015

The OIC’s Standing Committee for Information and Cultural Affairs (COMIAC), chaired by H.E. Macky Sall, President of the Republic of Senegal, held its Tenth Session in Dakar, on 28-29 April 2015. IRCICA is one of the OIC’s institutions whose mandate comes within the context of the COMIAC, which is one of the three Standing Committees each chaired by a head of state of a Member State of the OIC. As usual, a progress report on IRCICA’s activities was presented to the COMIAC session by Dr. Halit Eren. During the opening of the session, Dr. Eren presented to H.E. Macky Sall, President of Senegal, the major album of historical photographs of Makkah al-Mukarramah and Madina al-Munawwara which was published by IRCICA in 2013.

During the period of the COMIAC Session, Dr. Halit Eren met with the Minister of Culture and Communication of Senegal H.E. Mr. Mbagnick Ndiaye. The talks evaluated in detail existing and potential areas of cooperation between Senegal and IRCICA. Among the subjects of emphasis were: continuation of the joint scholarly activities relating to el-Haj Moussa Kamara and his work Zuhur al-Basatin, organization of a cultural event on traditional music, and technical cooperation for restoration of cultural heritage assets of Senegal including Islamic manuscripts.