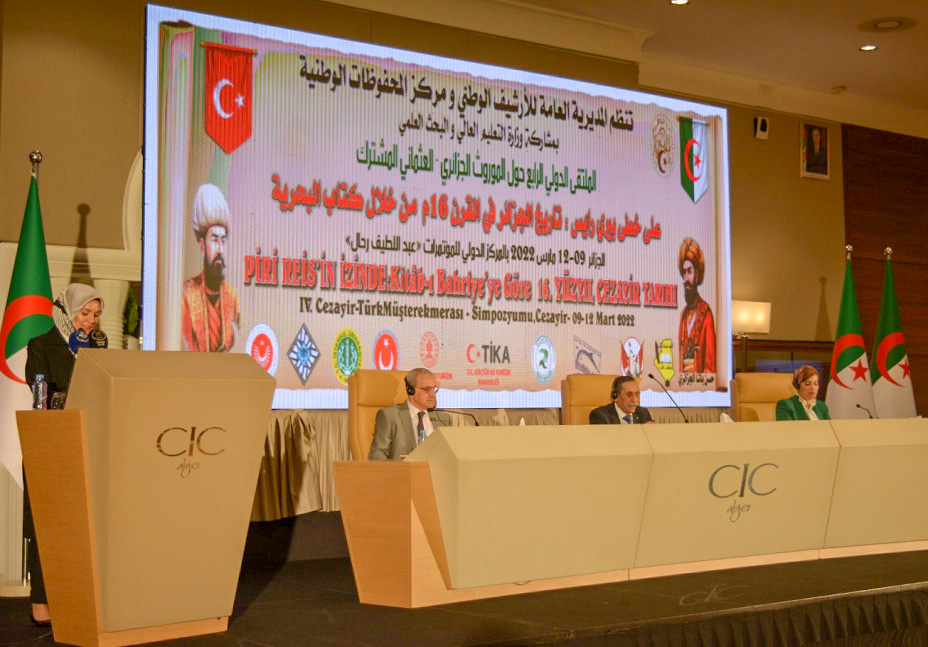 At the invitation of the Directorate General of the Algerian National Archives attached to the General Secretariat of the Presidency of the Democratic and Popular Republic of Algeria, the expert from IRCICA, Prof. Dr. Fazil Bayat, participated in the activities of the Fourth International Forum on «The Algerian-Ottoman Common Heritage in the Traces of Piri Reis: the History of Algeria in the 16th Century AD through the Kitab-ı Bahriye (The Book of Navigation)» which took place in Algiers, from 9 to 12 March 2022. The forum was organized by the Directorate General of the National Archives and the National Center for Manuscripts, in coordination with the Ministry of Higher Education and Scientific Research, and with the contributions of some Turkish institutions, among them: the Turkish Cooperation and Coordination Agency (TİKA), the State Archives of the Presidency of the Republic of Turkey, the Atatürk High Authority for Culture, Language and History, and the Turkish Historical Society.

The forum was dedicated to Piri Reis [Ahmed Muhiddin Piri], Turkish admiral and cartographer who lived in Algeria in the 16th century. His work Kitab-ı Bahriye (The Book of Navigation) is an authentic reference on maritime navigation in the Mediterranean Sea at his time. It also represents an important part of the two countries’ common memory. A documentary exhibition entitled “In the Traces of Piri Reis: The History of Algeria in the 16th Century According to The Book of Navigation” accompanied the forum.

The opening ceremony was held in the presence of Mr. Abdelbaki Benziane, Minister of Higher Education and Scientific Research of Algeria representing the Prime Minister, and Mrs. Soraya Mouloudji, Minister of Culture and Arts of Algeria. The Turkish side was represented by Prof. Dr. Uğur Ünal, President of the State Archives of the Presidency of the Republic of Turkey; Prof. Dr. Muhammet Hekimoğlu, President of the Atatürk High Authority for Culture, Language and History; and delegates from partner institutions. The opening ceremony also heard the speeches of Dr. Abdelmadjid Shikhi, Advisor to the President of the Republic of Algeria in charge of the National Archives and Memory, and Mrs. Mahinur Özdemir Göktaş, Ambassador of Turkey in Algiers. It was pointed out that the forum, which coincided with the sixtieth anniversary of bilateral relations between Algeria and Turkey, was throwing light on realities rooted in their common historical memory.

More than 20 researchers from Algeria and Turkey presented research papers relating to the following three main themes: “Analysis and evaluation of Kitab-ı Bahriye (The Book of Navigation) with regard to the description and the history of Algeria in the 16th century”; “Characteristics of the contents of the first and the second copies of Kitab-ı Bahriye (The Book of Navigation); “Algerian-Ottoman relations in the 16th century”.

Dr. Fazil Bayat presented the Advisor to the President of the Republic of Algeria with the last three volumes resulting from IRCICA’s research project and book series entitled “The Arab Counties in Ottoman Documents” which deal with the history of Algeria and the Ottoman provinces of North Africa in the 16th century.