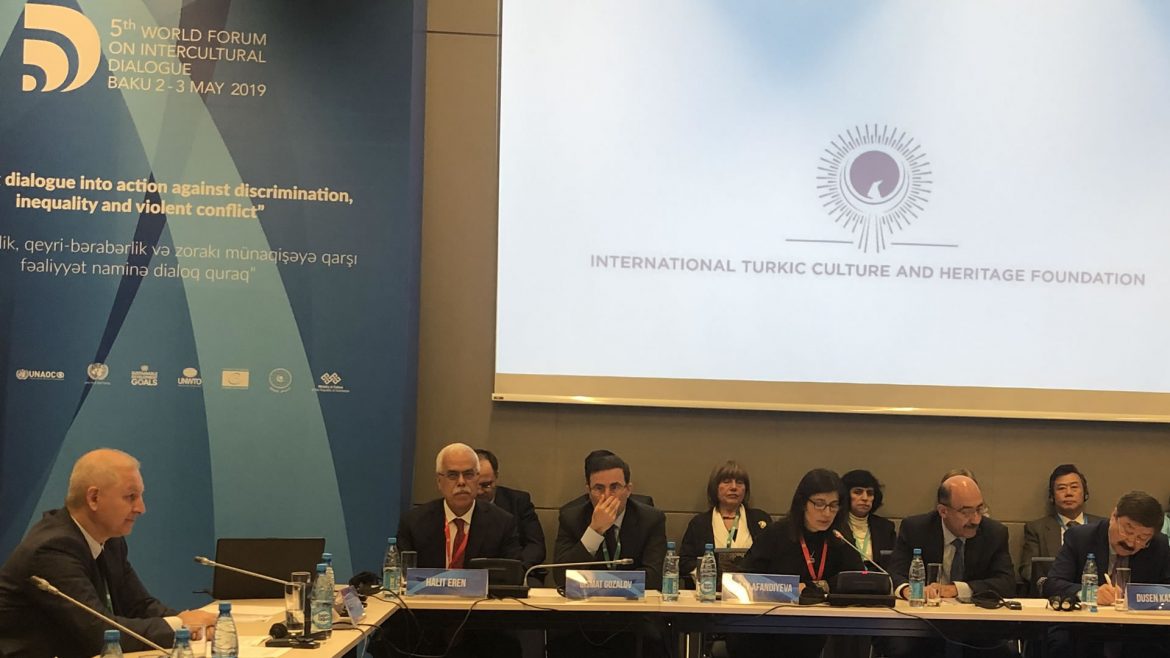 The 5th World Forum on Intercultural Dialogue was held in Baku, on May 2019 in Baku, on 2-3 May 2019, under the patronage of H.E. Mr Ilham Aliyev, President of the Republic of Azerbaijan, in cooperation with UNESCO, the UN Alliance of Civilizations, the UN World Tourism Organization (WTO), the Council of Europe and the Islamic Educational, Scientific and Cultural Organization (ISESCO). This Forum’s motto was “Building dialogue into action against discrimination, inequality and violent conflict”. The participants consisted of heads and members of governments, ministers, heads of international and regional organizations, policy makers, cultural professionals, experts and media representatives. The Forum examined the critical role of Intercultural Dialogue as an actionable strategy for building human solidarity and helping localities counter the violence and discrimination in diverse communities. It is placed in a series of forums that constitute the “Baku Process”.(http://bakuprocess.az/baku-process/about-process) A variety of sessions were held including an academic forum on “Interreligious Dialogue and the Governance of Religious Diversity”, a High-Level Panel of International Organizations, and various thematic sessions. The Secretary General of the OIC H.E. Dr. Yousef A. Al-Othaimeen delivered an address at the Forum calling for creating a cultural bulwark built on the values of dialogue and intercultural exchange, to help tackle the rising threat of hate and discrimination and their attendant forms of terrorist and extremist activity. On the Organization’s counterterrorism and anti-extremism efforts, the Secretary General said the OIC has contributed effectively to advancing intercultural dialogue and promoting understanding between peoples from all religions and civilizations. He said that the OIC puts this objective at the heart of its activities.

Prof. Halit Eren, Director General, IRCICA, participated in the World Forum. Prof. Eren delivered an address at the session themed “The Role of the Great Silk Road in Building Dialogue among Turkic Speaking Countries” which was organized by the Turkic Culture and Heritage Foundation (Baku). This scholarly and diplomatic session was held in the presence of Dr. Abulfas Garayev, Minister of Culture and Tourism of Azerbaijan. It was opened by Ambassador Gunay Afendiyeva, President of the Foundation. It included 17 speakers, consisting of heads of international, regional and national cultural organizations, diplomat, scholars, and journalists. Prof. Eren said that along with merchants and their commodities, the Silk Road carried cultural contacts which fostered awareness between peoples of different faiths and cultures and boosted intercultural exchanges. These dynamics of the Great Silk Road are revived in our time. The countries of the Silk Road have come together under the umbrella of different international and regional organizations. The latter, through their activities and cooperation, are highlighting and protecting the heritage of the Silk Road and activating it in support of today’s cultural interactions. In this regard he gave examples of IRCICA’s studies on cities and architecture, artworks and handicrafts, music and folklores of the OIC-IRCICA member countries, which include the Turkic region.