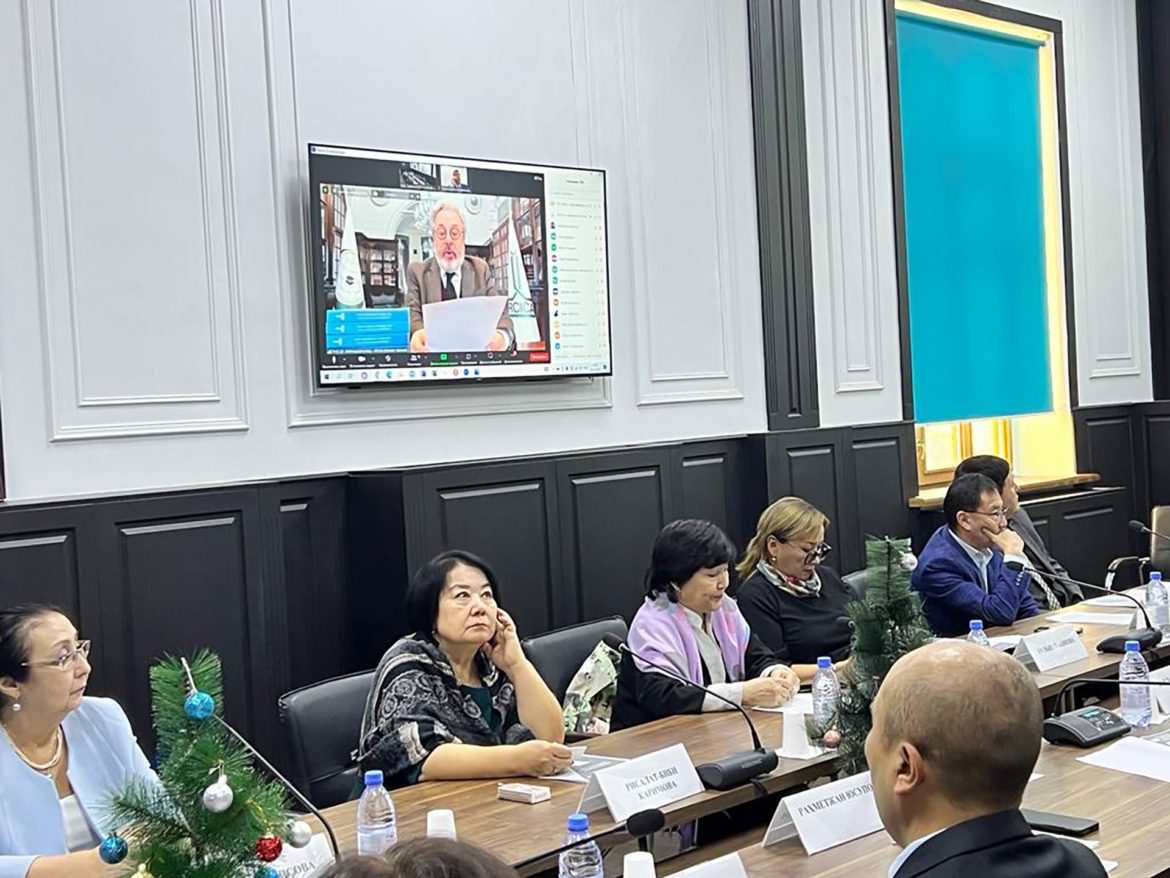 Joint book launch with the Institute of Oriental Studies of Kazakhstan

R.B. Suleimenov Institute of Oriental Studies of the Ministry of Science and Higher Education, Republic of Kazakhstan, and IRCICA, held an online conference to launch their joint publication titled Islamic Civilization in the Great Steppe, on 28 December 2022. The book contains the papers that were presented during the conference on “Scientific Readings Dedicated to the Memory of Outstanding Kazakh Scholar in Oriental Studies Dr. Timur Kasymovich Beisembiev (1955-2016)” that was organized by the two institutions in Almaty, in 2017. Following the opening words of Dr. Duken Masimkhanuly, General Director, Suleimenov Institute of Oriental Studies and Prof. Dr. Meruyert Abusseitova, Director of the Republican Information Center for the Study of Historical Materials at the Suleimenov Institute of Oriental Studies, the conference was addressed by the Academician Prof. Bakytzhan Zhumagulov, Member of the Senate of the Republic of Kazakhstan; Prof. Dr. Mahmud Erol Kılıç, Director General of IRCICA; Prof. Dr. Zhanil Zhunusova from the Department of Theoretical and Applied Linguistics of the L.N. Gumilev Eurasian National University (Astana City), and Prof. Dr. Ashirbek Muminov, Advisor to the Director General of IRCICA on Programs.

Prof. Dr. Abusseitova, who was the representative of the Republic of Kazakhstan in the Governing Board of IRCICA from 2009 to 2014, expressed thanks and appreciation to Director General Prof. Dr. Mahmud Erol Kılıç and IRCICA for the support extended to the conference and the book dedicated to Beisembiev. She highlighted the significance of Beisembiev’s research, publications, and academic contacts in various countries, which contributed to strengthening the position of studies on the historiography of Kazakhstan and Central Asia. In his address, IRCICA Director General Prof. Dr. Mahmud Erol Kılıç outlined the objectives of IRCICA’s research projects and conferences focusing on the history and historiography of Islamic culture and civilization in their different regional contexts across the world. Director General Kılıç said that the cultural and academic institutions of Kazakhstan and Central Asia are among the most active collaborators of IRCICA and that Suleimenov Institute of Oriental Studies was one of the first in Kazakhstan to organize joint projects with IRCICA. Prof. Kılıç referred in this regard, to IRCICA’s first conference on “Islamic Civilization in Central Asia” that was coordinated by the Institute of Oriental Studies and IRCICA in Astana, in 2007, and the current reinforcement of the cooperation under the Memorandum of Understanding for Cooperation signed by the two institutions exactly one year ago. In his speech, Prof. Dr. Ashirbek Muminov (IRCICA) described the theoretical and practical cooperation that produced this book and thanked the authors of the articles and all those who collaborated in the preparation of the book.

Following the introductory addresses, several scholars and researchers took the floor to discuss specialized, practical aspects of historiography and studies on historiography and international, inter-institutional cooperation in history studies, with frequent references to the subjects that were studied by the scholar Dr. Timur Beisembiev. The speakers also paid tribute to the memory of the late Professor and former Grand Mufti Abdsattar Derbissali, who gave the opening address of the 2017 conference and contributed to the editing of the book as the Director of the Institute of Oriental Studies.