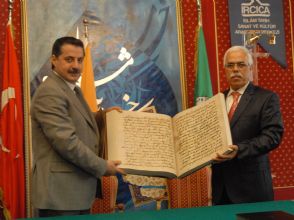 Mr. Faruk Çelik, Minister of State of Turkey, visited the Director General of IRCICA Dr. Halit Eren on Friday, 11 March 2011. Extensive talks were held on cultural activities and cooperation in the Muslim world, with special focus on IRCICA’s mission as the OIC’s cultural research center. Dr. Eren briefed the Minister on the Centre’s programs and publications and guided him to IRCICA library.

Mr. Faruk Çelik is the Minister of State in charge of the Presidency of Religious Affairs, the Turkish Cooperation and Development Agency TİKA, and the Presidency for Turks overseas and relative communities.

During the visit Dr. Eren recalled with appreciation the support and cooperation extended by the Turkish Government to the International Inaugural Conference of the “1400th Year of the Revelation of the Holy Quran”, which was organised by IRCICA under the patronage of the Prime Minister of Turkey Mr. Recep Tayyip Erdoğan and and opened by the Prime Minister on 5 September 2011. Following the opening ceremony, the working sessions of the conference were chaired by Mr. Faruk Çelik, representing Turkey. During the discussions where the representatives of Islamic countries, eight of them ministers, were speaking of activities implemented by their respective governments, Mr. Çelik briefed the conference on activities being held in Turkey in the field of Quranic studies and education.