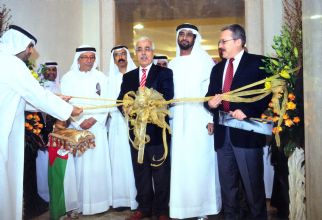 IRCICA, in cooperation with the Department of Tourism and Commerce Marketing of the Government of Dubai, organised under the patronage of H.H. Sheikh Hamdan bin Muhammed bin Rashid Al Maktoum, Crown Prince of Dubai, the Dubai International Arabic Calligraphy Exhibition, 6th Edition, in Dubai, United Arab Emirates on 24-28 February 2010,

47 calligraphers from different Arab and Islamic countries including United Arab Emirates, Saudi Arabia, Jordan, Iraq, Syria, Egypt, Palestine, Sudan, Iran, Turkey, Spain and Bosnia Herzegovina, participated at the exhibition and presented various workshops and lectures on their works and styles of calligraphy. Among some of the workshops presented, the workshops by Hüseyin Kutlu on "Islamic Arts: Scripts in the mosques and the writing of the Quran", "Golding" by Arda Çakmak and "Shakasta and its composition" by Yadollah Kaboli, can be mentioned.