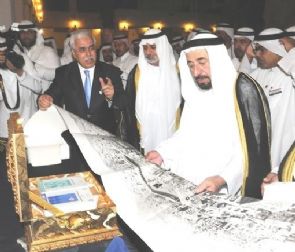 On the Occasion of celebrating Sharjah as Capital of Islamic Culture for the Year 2014, Department of Culture and Information of the Government of Sharjah and the Research Centre for Islamic History, Art and Culture (IRCICA), Istanbul jointly organized Sharjah Heritage Days: Islamic Heritage as One Tent which include Folklore Music, Arts of Cooking and Handicrafts from different places of the Muslim World, Sharjah, 6-25 April, 2014.

1- International Exhibition for Innovators of Artisans from 30 different countries among the Muslim World who came with their instruments and practiced their techniques of work in-front of the visitors and the public, in which they provided a unique  opportunity for the participants and the visitors to know closely images of such rich heritage from various geographical places of the world and also interact with the artisans on issues relating to their applied techniques as well as obtaining some of the artisans innovated products.  The exhibition site were made as a Crafts Bazar which displayed various types of handmade products which came from different countries and allowed visitors to see innovative products in the field of Embroidery, Weaving, Costumes, Carpets, Kilims, Sadou, Pottery, Silver Works, Metal Crafts, Engraving and Ornamentation, Leather products, Ceramic, Mosaic, Textile and etc..

2- Folklore Musical Performance from different Countries of the Muslim World which witnessed the participation of distinguish Folkloric Musical Groups from Azerbaijan, Uzbekistan, Kyrgyzstan, Algeria, Turkey, Daghistan, in addition to local Folklore Groups from the United Arab Emirates, and other groups brought by the Department of Culture from India, Malaysia, Egypt and Morocco.

3- A unique show of professionals in the field of Cooking and Sweets from Algeria, Indonesia, India, Tunisia, Kyrgyzstan, Turkey in addition to the United Arab Emirates who prepared various types of their local food and sweets that were provided to the visitors who found this as an opportunity to know more about the richness of traditions and meals in various different geographical countries which resulted indirectly in encouraging more channels of communication and cultural dialogue among different groups of people of the world.

The Heritage Days aimed to gather innovators in the field of Folklore Music, Cooking Arts and Handmade Products from different countries of the Muslim World within special designed Tents that displayed and performed Folklore Music, and a variety of food and sweet products.  The Festival also displays the works and techniques applied by artisans of various geographical regions of the Muslim World as were practiced at their workshops.  Such activities provided an attractive opportunity for the visitors which attracted more groups of audience and has encouraged at the same time the activation of the cultural, heritage and touristic life of the Sharjah Emirate.

IRCICA worked hard for nearly a three months period to contact the concerned Craft and cultural authorities in many countries of the Muslim World providing all the necessary technical experience and advisory negotiations to ensure the selection of Folklore Musical Groups, Professionals of Cooking and sweets making, in addition to a group of the innovators in the field of handmade products which finally were crowned with an active and successful participation in the various activities of this important event.