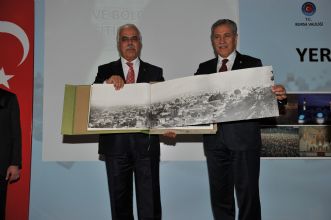 IRCICA’s Album of historical photographs of Bursa launched under the chairmanship of the Deputy Prime Minister of Turkey H.E. Mr. Bülent Arınç

On 23 November 2011 a book launching was organized in the city of Bursa for the major publication by IRCICA entitled Bursa in Photographs of the Period of Sultan Abdulhamid II. The book launching took place on the occasion of the Regional and Local Media Training Seminar which was conducted jointly by the High Council for Radio and Television, the General Directorate for Press and Publications and the Governorate of Bursa. H.E. Mr. Bülent Arınç, Deputy Prime Minister of Turkey, addressed the audience qualifying the publication as a comprehensive reference on Bursa highlighting its history, its districts, its mosques, its mausoleums, its streets and its people and thanked IRCICA for this album of historical documentary value reflecting a specific period of this beautiful city. As to IRCICA Director General Dr. Eren, he briefed the audience on the contents of the album which reflect a recent segment of the millennial history of Bursa but still reach us from a past as distant as one century. He said that its contents show the importance that was accorded to Bursa by the Ottoman State which was not only for the city’s having hitherto served as its capital but also its economic and architectural features and its spiritual legacy as a land where rest numerous rulers, philosophers, religious scholars, artists and craftsmen who all contributed to its cultural heritage. He recalled earlier publications in the same series by which IRCICA rendered historical photographs from the Yıldız Palace Albums accessible to interested  parties namely those on Al-Quds/Jerusalem, Afghanistan, Egypt, Japan, Yemen, and the cities of Istanbul and Erzurum. Dr. Eren presented copies of the album to Mr. Bülent Arınç and to businessman Mr. Zafer Topaloğlu, who sponsored the printing of the album. Deputy Prime Minister Mr. Arınç presented Mr. Zafer Topaloğlu a plaque of appreciation and the honorary citizenship of Bursa.