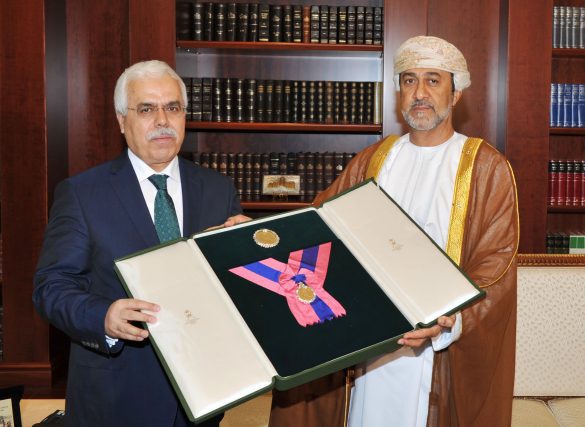 The Sultan of Oman His Majesty Qaboos bin Said conferred the Sultan Qaboos Order for Culture, Science and Art of the First Degree on Prof. Halit Eren, Director General of IRCICA, in appreciation of his good contributions to research in serving the Centre and its objectives.

The Sultan Qaboos Order for Culture, Science and Art was presented to Prof. Halit Eren on behalf of His Majesty the Sultan of Oman, by H.H. al-Sayyid Haytham b. Tariq Al Said, Minister of Culture and Heritage of Oman, with a ceremony held in Muscat on 22 February 2012. The Minister of Culture and Heritage made the following statement while presenting the Order: “I hereby would like to convey to you the greetings of His Majesty Sultan Qaboos bin Said. Prof. Eren was duly conferred the Sultan Qaboos Order for Culture, Science and Art of the First Degree due to his contributions to research on Islamic culture, arts, civilization and history in serving the Research Centre for Islamic History, Art and Culture (IRCICA) and its objectives. I present you this Order on behalf of and with the greetings of the Sultan.” H.H. the Minister of Culture and Heritage Al Said stated that IRCICA under the capable leadership of its Director General Halit Eren was serving as an effective bridge of civilization between Oman and Turkey, and they as the government of Oman expected that the relations between the two countries will become stronger in the future.

The Certificate of the Sultan Qaboos Order for Culture, Science and Art of the First Degree, bearing the signature of Sultan Qaboos bin Said, was presented to Prof. Eren by H.E. Ambassador Qais Salim Ali Al Said, Ambassador of the Sultanate of Oman in Ankara, Turkey (the host country of IRCICA) on 12 April 2012 in Ankara. The Certificate, which has the citation for the Order, reads: “We, Qaboos bin Said, Sultan of Oman, in recognition of the outstanding services rendered by Prof. Halit Eren, with regard to the works he has accomplished, have decided to confer on him the Order for Culture, Science and Art of the First Degree, and upon our order to this effect this Certificate was issued from our Palace in Muscat, on 29 Rabi al-awwal 1433 H/22 February 2012.“