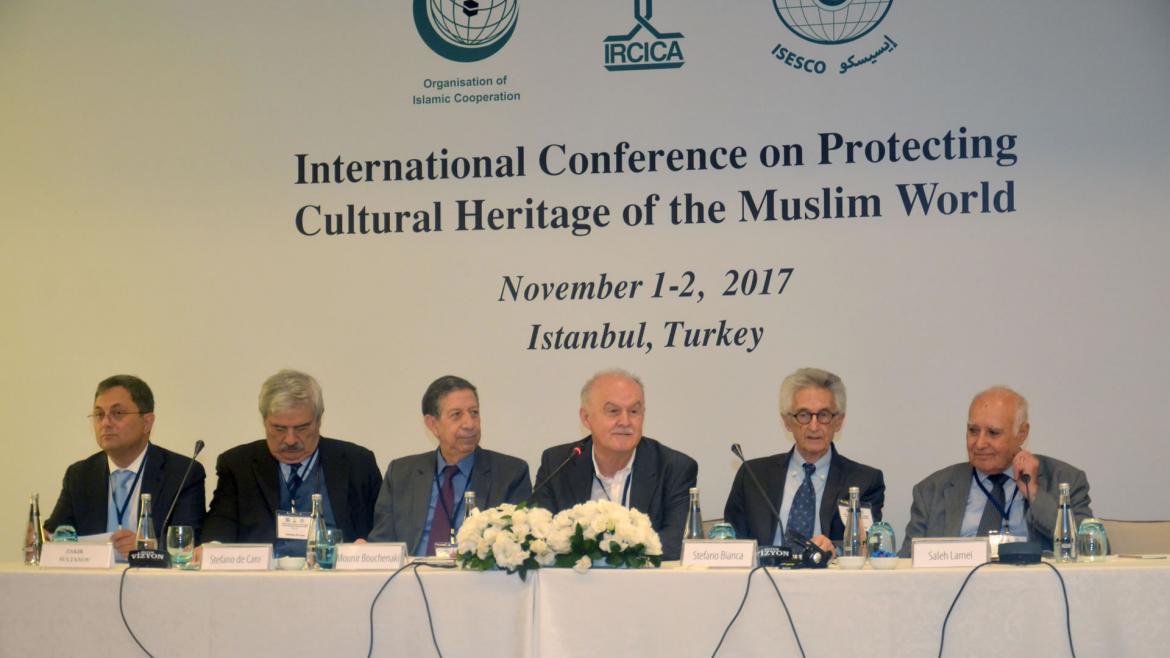 Authorities and experts in preservation of cultural heritage came together with a view to assess the state of cultural heritage in the Muslim world, evaluate preservation efforts and recommend measures in this regard, at the international conference on “Protecting the Cultural Heritage of the Muslim World”. The conference was organized by the General Secretariat of OIC together with the OIC Research Centre for Islamic History, Art and Culture (IRCICA, Istanbul) and the Islamic Educational, Scientific and Cultural Organisation (ISESCO, Rabat) and held in Istanbul, on 1-2 November 2017. The opening of the conference was officiated by Dr. İsmet Yılmaz, Minister of National Education of Turkey.

H.E. Dr. Abdulaziz bin Ahmed al-Othaimeen, Secretary General of OIC, addressed a message to the conference which was read by the Director General of Cultural, Social and Family Affairs of OIC, Mrs. Mahla Talebna.

H.E. Ambassador Hameed A. Opeloyeru, Assistant Secretary General of OIC, was present at the conference.

Eminent experts of cultural heritage from international organizations addressed the conference, as cited below.

The conference theme was addressed through papers and reports on studies and activities conducted on heritage sites presented by 49 experts, specialized professionals and academicians from 25 countries around the world. Knowledge on heritage sites and properties was shared, experiences on preservation and reconstruction work were communicated. Guidelines were formulated as suggestions for future preservation policies and activities. The participants unanimously adopted the Istanbul Declaration on Protection of Cultural Heritage of the Muslim World.

The opening ceremony started with the address of IRCICA Director General Dr. Halit Eren. In this address Dr. Eren said that the Muslim world’s cultural heritage which constitutes a major and an integral part of world heritage faces alarming threats and serious destruction increasingly in the present time. Cities where arts and sciences flourished, structures and artifacts representing different styles and customs developed over centuries are being devastated and plundered in various parts of the world including Al-Quds and Palestine, Afghanistan, Iraq, Syria, Libya and Mali. He said that the conference was prompted by the urgent need to enhance regular preservation efforts of the cultural heritage and promote international exchange of knowledge and expertise towards reconstruction. IRCICA Director General summarized the activities undertaken by IRCICA in the field of heritage preservation, among them the Prince Sultan bin Salman Islamic Architectural Heritage Database and the training programs conducted jointly with Al-Turath Foundation, Kingdom of Saudi Arabia.

ISESCO Director General Dr. Abdulaziz Othman Altwaijri’s message was read by Dr. Muhammad Younis, expert, ISESCO. Dr. Altwaijri underlined the necessity that organizations working in the Islamic cultural field, in cooperation with the Member States, scholars and experts everywhere, cooperate to preserve the heritage and revive it so that it can serve the sustained development of peoples and be recorded in the memory of the cultural heritage of entire humanity.

The message of H.E. Dr. Abdulaziz bin Ahmed al-Othaimeen, Secretary General of OIC, was shared by Mrs. Mehla Talebna, Director General for Social, Cultural and Family Affairs of the OIC. The Secretary General alluded to the increasing current threats faced by Islamic heritage especially in conflict zones, in particular Al-Quds and Palestine, and other regions. OIC Secretary General emphasized the need to reinforce international cooperation, especially between international organizations such as OIC and UNESCO. In this regard the Secretary General referred to various resolutions taken by the OIC Member States at their ministerial conferences and their implementation processes by the OIC General Secretariat, as well as to recent resolutions adopted by the United Nations towards protection and reconstruction of heritage destroyed and pillaged in conflict zones. OIC Secretary General said that the present conference was an occasion to promote exchanges of best practices among the OIC Member States and experts from UNESCO and other international organizations

H.R.H. Prince Sultan bin Selman bin Abdul Aziz, President of the Saudi Commission for Tourism and National Heritage, Kingdom of Saudi Arabia, in his comprehensive address, expressed his pleasure to be attending the conference on protection of cultural heritage, a subject to which he himself has devoted a large part of his career, and thanked in this regard the OIC, the centre IRCICA and its eminent Director General and his colleagues, and ISESCO for organizing it. Prince Sultan bin Salman pointed out that the Muslim world passes through a quite delicate period which necessitates further coordination of efforts and more commitment towards protecting the heritage. The latter is a principal element of Muslim identity, of Muslims’ place among nations and of the future of our generations and it is at the same time also part of world heritage.

The Minister of National Education of Turkey H.E. Mr. İsmet Yilmaz, addressing the ceremony, underlined the importance of the conference and wished success to the organizers in seeing its objectives achieved. The Minister stated that culture is a treasure of humanity heightening the value of human existence. He said that above everything comes protection of the human being. Then comes protection of the works produced by the human being which constitute the heritage; protecting the latter and transferring it to coming generations is a task. The Minister emphasized that culture and civilization can only be protected by establishing peace. Thus the first condition for protection of heritage is peace. The second condition is provision of education. Efforts must be joined to promote peace and education. Minister İsmet Yılmaz wished success to the conference.

The main themes of the conference were:

– Role of museums in preservation of heritage

– Management of heritage preservation and development: Modalities of preparation of the strategy to protect and promote cultural heritage in the Muslim world and its implementation mechanism

– Protection of heritage in Muslim countries in advanced stage of conflicts, on the request of their governments

– Rebuilding heritage in zones of war and conflict.

At the end of the conference, the participants unanimously adopted the “Istanbul Declaration on Protecting the Cultural Heritage of the Muslim World”. The text of the adopted Declaration is reproduced below.

on Protection of Cultural Heritage of the Muslim World

The International Conference on Protection of Cultural Heritage of the Muslim World convened by the OIC General Secretariat, IRCICA and ISESCO on 1-2 November 2017 in Istanbul with the participation of OIC Member States, international organizations and experts, Having heard research papers, survey reports and country experiences; evaluated and discussed the present state of cultural heritage of the Muslim world, problems encountered and threats faced; estimated future prospects and ways of improving the protection and preservation of this heritage, Called upon the OIC Member States, organizations and world community concerned, to

-Identify frameworks and establish modalities for enhancement of inter-state cooperation for protection of heritage and support of national and international efforts, within the framework of UN charter and the principles enshrined in it and include in this regard the subject of considering establishment of a Strategy of Joint Islamic Action for Protection of Cultural Heritage of the Muslim World in the cultural agenda of OIC with such a strategy giving the necessary and due respect and importance to all nations sovereignty and adhering to the principles of non-interference in member states’ internal affairs, henceforth rendering it help upon a nation’s request.

-Link policies of cultural heritage protection with policies aimed at countering violent extremism, extremism, religious and cultural discrimination, xenophobia and Islamophobia according to the relevant stipulations of the UN charter and its principles.

-Identify the economic, social and tourism aspects of cultural heritage in its different types and categories; and set aims and programs to develop and make better functional use of those aspects.

-Invite states and institutions to implement joint projects that would create awareness of the authenticity and timeless importance of urban heritage of the Muslim world.

-Designate OIC-IRCICA and ISESCO as the focal points of activities aimed at Protection of Cultural Heritage in the Muslim world in the framework of the OIC platform.

-Request the member countries of OIC to support efforts for preserving universally recognized and regionally important sacred sites such as Al Aqsa Mosque / Al Haram Al Sharif, heritage sites in Nagorno-Karabakh and occupied Kashmir from various types of manmade damages including excavations, site alterations and overlapping developments in accordance with the OIC charter.

– Invite state parties to recognize, promote and enhance intangible heritage and mainstream it in the conservation process of cultural heritage.

– Invite OIC member states to benefit from the best examples in cultural heritage protection such as the historical mosques conservation program in the Kingdom of Saudi Arabia.

– Evolve mechanisms to document and publicize Islamic cultural heritage that is challenged due to civil wars, communal conflicts and constraints of physical and social access.

– Launch an invitation for establishment of a Special Fund to support cooperation among universities in education, training and research on cultural heritage.

– Launch an invitation for establishment of a Special Fund to support implementation of projects of outstanding value regarding realization of strategies and policies for the protection of cultural heritage of Muslim world in coordination with national authorities of member states upon their explicit request based on priority needs assessment.

– Encourage exchanges of administrative, technical and artistic expertise among OIC Member States as regards to design, development and utility of urban sites.

– Encourage local governments to develop systems for education and awareness-raising processes among local people including all different age groups of children and youth, in relation to protection of cultural and natural wealth in their region.