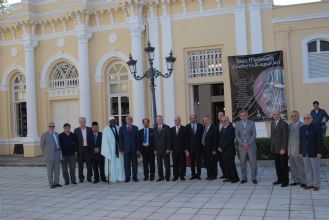 President Abdoulaye Wade, President of Senegal, Chairman of the

11th Islamic Summit and Chairman of the COMIAC – 8 November 2009

Yıldız Palace. The opening ceremony was held in the presence of President Malal Bacai Sanha, President of the Republic of Guinea-Bissau, as guest of honour. The President was in Istanbul to participate in the Economic Summit of the COMCEC (OIC’s Standing Committee for Economic and Commercial Cooperation) on Monday 9 November. The Secretary General of the OIC Prof. Ekmeleddin İhsanoğlu, many Ministers from the Member States participating in the Economic Summit also attended the ceremony at IRCICA, which was an occasion for the latter to brief them on its activities.

Maître Abdoulaye Wade, President of the Republic of Senegal, Chairman of the 11th Islamic Summit Conference, and Chairman of the Standing Committee for Information and Cultural Affairs (COMIAC), sent a Message to IRCICA on this occasion. The Message was read on behalf of the President by Mr. Amadou Niang, Minister of Commerce of the Republic of Senegal. In his Message, the President pointed to the "particularly significant results obtained by IRCICA in the various fields covered by its activities", underlined and affirmed the importance of the essential guiding lines of the mission of IRCICA in the present time.

The ceremony started with the presentation of a brief documentary on the Centre’s activities. Then, IRCICA Director General Dr. Halit Eren gave his welcoming address, first expressing gratitude for the support extended by Heads of State of the Member States and their Governments to IRCICA which helped it achieve its present status with many authentic works on its record all responding to the objectives set for it. He said that furthermore, in its orientations and initiatives IRCICA benefited immensely from the guidance and the liaisons provided by its Governing Board members. He said: "Based on these solid foundations, IRCICA drew from the inexhaustible sources and legacy of Islam over its vast geography. It promoted research and learning on this history, on its heritage that is living in the cultures, the languages, the cities, the arts and sciences of so many peoples and communities across the world."

Dr. Eren said that in disseminating the results of its studies the Centre addresses multiple audiences within and outside the Member States including governments and NGOs, academic platforms, the media and public opinion. Thus over the past twenty-nine years, networks of interested individuals and institutions from within and outside the Member States were formed around IRCICA in relation with its various areas of activity. He went on "This is in conformity with the overall vision of IRCICA, because reaching receptive and functional public audiences far and near is all the more important for institutions like IRCICA which respond to actual current issues often of universal scope. Surely, a foremost issue of concern for us is to enhance the true image of Islam around the world, promote its principles of tolerance and coexistence of cultures. We care very much to deploy scholarly efforts to promote respect of the different faiths within non-Muslim communities of the world, especially in the West. We sadly recall in particular, the defamation and negative stereotyping which has been directed to Islam and Muslims by some Western circles in the last couple of years through the denigratory publications against the sacred values of Islam. Moreover, all Muslims were hit deep in their hearts once more last Sunday upon the attacks directed by extremist Israelis at Masjid Al-Aqsa. These outrageous acts are renewed expressions of deep-rooted fanaticism and hatred directed in this case against Muslims. In dealing with such issues of deep concern for Muslims our Centre is working from within the field of its own mandate by organizing intergovernmental collaboration, research programs and field studies, producing reports and references aiming to raise awareness in public opinions. … Respect of the different faiths, their sacred symbols and shrines, is an integral part of a consciousness, still much needed in a large part of the world, of the shared values of all faiths and the commonness of human destiny." The Director General gave examples of the Centre’s projects reflecting these guidelines of its objectives.

Dr. Abdulaziz Turki Subaie, member of the Governing Board of IRCICA representing the State of Qatar, ex-Minister of Education, spoke on behalf of the Governing Board. He expressed gratitude to the host country the Republic of Turkey for the patronage and the support extended to IRCICA. He also expressed gratitude to the Secretary General of the OIC for the continuous support accorded to the Centre’s activities. He expressed thanks and appreciation to the Director General of the Centre for the latter’s achievements. Dr. Subaie commended the library expansion project and setting up of a digital library and expressed the Governing Board’s appreciation of the support extended to such projects by leaders of the Muslim world.

The Secretary General of the OIC Prof. Ekmeleddin İhsanoğlu addressed the ceremony, saying that he was deeply touched to be there sharing the opportunity with the distinguished guests, of one of the glorious days of the Centre. He recalled that the whole Muslim world is celebrating these days the 40th anniversary of the OIC, that they were in Istanbul to celebrate the 25th anniversary of the COMCEC, and that at the same time IRCICA was nearing completion of its 30th year. The Secretary General said that IRCICA proved to be one of the most successful research institutions and one of the cultural wings of the OIC. He said he is particularly proud to be associated with it not only because of being associated with it from day one, but also as a scholar and in his capacity as Secretary General. "I feel that the Muslim world and the world of learning at large, is in need of IRCICA and its publications. I don’t think any library in the world which deals with Islamic studies can do without the publications of IRCICA. I don’t think that our knowledge of the Muslim world culture and civilization, art, architecture, is the same as it was before the establishment of IRCICA. I think there has been a change, a tremendous positive change in what we know now about Islam, starting from the Holy Book – the Mushaf, going through the art of calligraphy, architecture, science, and handicrafts, and of course, history, history of our nations, history of our cultures, history of our common civilisation, in particularly what has been known as the periphery of the Muslim world, one of the most viable and successful projects of this institution was to focus on the history of culture of the Muslim nations in what was called the periphery of the Muslim world, that is to say, Southeast Asia, South Asia, the Balkans, Volga-Ural, these areas were not known to the common Muslim people and they were not known even to scholars; few lines in books of general nature like the Cambridge History of Islam or the Encyclopedia of Islam were about these. Now with the Centre and its activities, we have great references about these parts of the world." The Secretary General said "now with its second Director General you have seen that it has expanded its horizons and gained a new dynamism. This work would not be possible without the work, the dedication and the sacrifice of the people working here; it would not have been possible without the help of the members of the Governing Board, and without the support of the Member States, their scholars, universities, and the public opinion. IRCICA has proved to be an institution that won their appreciation." Secretary General Prof. İhsanoğlu said, addressing the President of the Republic of Guinea-Bissau, that His presence here was an expression of how His country value IRCICA. The latter has implemented many projects in Africa; it organised three symposia, among others, and of course this goes back to the eighties; from day one of its establishment, Africa was in the heart of the interest of this Centre." The Secretary General then indicated some secrets of the Centre’s success: in this regard he underlined the hard work and commitment of its staff, the conduct of long-term programs – not having big names, big lines and then nothing behind, but real work: he said that at IRCICA there had been many examples of a book which took twenty years to prepare, a project which ran for ten years, such as the Mostar project which ran through 1994-2004 where the Centre restored and rebuilt many monuments and published many books on the history of Muslims in Bosnia and Herzegovina. He recalled that the Centre now runs a similar project for Al-Quds.

Following the address of the Secretary General, H.E. Mr. Amadou Niang, Minister of Commerce of the Republic of Senegal, read the Message of H.E. President Abdoulaye Wade, to the audience.

The Governing Board held its working sessions from the afternoon of the same day until the end of next day, that is, during 8-9 November 2009. It examined the activity report on the implementation of the 2009 work plan. It examined and finalised the proposed work program for 2010 before it is submitted to the Islamic Commission for Economic, Cultural and Social Affairs (the General Assembly of the OIC subsidiaries) and the Council of Foreign Ministers for adoption.

Message of Maître Abdoulaye Wade, President of the Republic of Senegal, Chairman of the 11th Islamic Summit Conference, and Chairman of the Standing Committee for Information and Cultural Affairs (COMIAC)

"Your noble mission is to highlight eternally the image of our Islamic religion and Islamic culture, and you have endeavoured not to neglect anything of this culture and this religion. Being convinced that Islam has reached all the continents for many centuries now, you also endeavoured to extend your research activities to all parts of the world. Beyond these researches, your task, our task, is to re-establish the beauty of the Islamic culture by showing clearly to the world

The energetic actions you undertook in Jerusalem reflect the care taken to restore the great works but they carry especially, at their basis, the perpetuation of a message of mutual acceptance in this elevated place where different civilisations meet, come into contact but unfortunately, sometimes collide with each other.

In the same vein and in the same spirit, we have already completed construction, at the heart of Dakar, of large infrastructural works which were done with the participation of many groups of craftsmen, artists and cultural actors from various specialties. The message these works carry is also a message of peace and call for dialogue of religions, cultures and civilisations.

Realisation of the broad vision that IRCICA brings to Islamic progress calls for an engagement of diverse and varied entities, each one more determining than the other: governments, religious experts from all faiths, universities, architects, men of culture, etc. Based on this vision, you have already opened numerous workshops everywhere around the world. No doubt, the Organisation of the Islamic Conference will be the launching pad for fast realisation of these works. Insha’allah it will build, in the months and years to come, the economic, social and cultural capacities that will further reinforce this Centre…."

Later during its working sessions and in its Final Report, the Governing Board of IRCICA expressed its gratitude for the significant and comprehensive Message of President Wade.