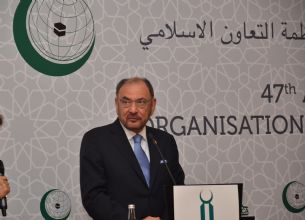 OIC Research Centre for Islamic History, Art and Culture (IRCICA), organized an OIC Day Reception in Istanbul on 1st October 2016 to commemorate the 47th Anniversary of the Organisation. The Reception was held in the presence of Turkey’s Former President H.E. Mr. Abdullah Gül, Vice Prime Minister H.E. Mr. Veysi Kaynak and OIC Secretary General H.E. Mr. Iyad Ameen Madani. A 200-strong audience of guests from diplomatic, academic, art and media circles attended the commemoration.
***
The OIC Day Reception organized by IRCICA at Conrad Hotel in Istanbul underlined the important role of the Organisation in addressing the Muslim world’s common concerns and challenges. Turkey’s Former President H.E. Mr. Abdullah Gül and Vice Prime Minister H.E. Mr. Veysi Kaynak gave addresses reaffirming Turkey’s support to the OIC and its institutions. The 200-strong audience included ministers and parliamentarians, heads and members of diplomatic and consular missions, university rectors and scholars, artists and members of the information media. The Governing Board members of IRCICA representing Qatar (Chair), Saudi Arabia, Kuwait, Chad, Niger, Pakistan, Senegal and Turkey attended the Reception, having completed a two-day 32th ordinary session.
The commemoration started with the recitation of verses from the Holy Quran.
Assoc. Prof. Halit Eren, Director General of IRCICA welcomed the participants. Referring to the symbolic significance of anniversaries as reference points in institutional histories, Dr. Eren said that this acquires further significance in the case of an international organization such as the OIC, which ranks second after the UN for its membership and embodies multiple histories of international relations: the OIC represents one-fourth of world population and refers to a geographical area from Kazakhstan to Mozambique and from Indonesia to Senegal, reaching Suriname and Guyana in South America. IRCICA Director General said “On this 47th Anniversary of the OIC which is also the 37th activity year of IRCICA, it gives us pride to glimpse at the big steps taken and long roads crossed during the past period in the Islamic cooperative action in diverse fields of development and international relations.” Alluding to the role of IRCICA in particular as the OIC’s cultural subsidiary, he said that IRCICA undertook innumerable initiatives and activities in promoting studies on Islamic culture and civilization, highlighting the true image of Islam as a religion of peace, solidarity and tolerance and building bridges of cultural interactions between countries and communities within and outside the Muslim world.

H.E. Mr. Iyad Ameen Madani, Secretary General of the OIC, delivered an address expressing thanks to the Government of Turkey for its unfailing support of the OIC, its active role in its activities and its hosting the OIC’s important subsidiary centres based in Istanbul (IRCICA) and Ankara (SESRIC). The Secretary General affirmed the OIC’s continuous support of and solidarity with the Presidency and the Government of Turkey. The Secretary General said that “though the OIC was launched because of the issue of Al-Quds and Palestine it has now expanded into a full-fledged organization. It has played and is playing s It has played and is playing an active effective role in countering the political challenges and crises that are being faced by the Member States.” Sketching out the current activities of the OIC, H.E. Madani said that two summit conferences were held this year, the regular summit held in Istanbul and the extraordinary summit on the subject of Palestine that was held in Jakarta, Indonesia; that in a couple of weeks, the regular conference of the Foreign Ministers will take place in Tashkent, Uzbekistan and again not too far off, the 6th conference on issues of women will be held in Istanbul. Mr. Madani said that a special conference for the ulama from Afghanistan will be held, aiming to bring all the parties in the Afghan political stage to subscribe to the political process and to leave behind conflicts and violence. The OIC is also actively engaged in contacts with the leadership in Iraq in order to hold a national unity conference in Baghdad, hopefully this year. Not too far off, next year Kazakhstan will host the first conference on science and technology. Recently this year, in New York, on the sidelines of the UN General Assembly meeting this year, the OIC sponsored a meeting to focus on the crisis in the problems of the Chad Basin both politically and economically and in terms of facing the terrorist group of Boko Haram. The Secretary General said that also in New York they met with the new leadership in Myanmar, bringing to their attention once more that the question of the Roghynia Muslim Minority cannot be ignored and the conditions under which they live cannot continue. After this glimpse at the steps, activities and dynamics that are taking place in the OIC, the Secretary General said “Of course, the challenges are still huge, but with faith in ourselves, faith in our culture, faith in our abilities, faith in our potentials, faith in our youth, faith in all elements of our societies those challenges can Insh’Allah be met. There are many mechanisms established to further take us along the road of facing up to those challenges among which is a dynamic and hopeful peace-making and conflict-resolution mechanism.” Concluding his address, the Secretary General said “We invite all of you as individuals, as people who hold responsibilities, people who are leaders in their sectors, to believe in the OIC. It is the stage where the Muslim Ummah meets, at the leadership and also at its popular level.”

In his address, Vice Prime Minister of Turkey Mr. Veysi Kaynak, said that he had known and appreciated the OIC since his youth, as the organization established in response to the tragedy befalling Palestine and Al-Quds. Mr. Kaynak conveyed the greetings and wishes of success of Prime Minister H.E. Mr. Binali Yıldırım, who was not able to come from Ankara due to the opening of the Turkish Grand National Assembly’s new term that day. Pointing to the fact that the Muslim world is now suffering from harder conditions than the time of its foundation, he said “Reference to terrorism, the big evil befalling humanity in our time, brings to mind terrorist organizations like Boko Haram, DAESH, Hizbullah, etc. which are unfortunately always associated with Islam. This does no good to our religion and it is a very big misfortune, a very big sorrow, that it places Islam, the religion of love, peace and compassion, side by side with terrorism. " The Vice Prime Minister expressed his appreciation of the activities conducted by the OIC. He said “We have to assume it as our mission to combat Islamophobia, which in these years has turned into hatred against Islam.”

Former President of Turkey H.E. Mr. Abdullah Gül delivered an address expressing his pleasure to be participating in the OIC Day commemoration. He recalled that Turkey extended great suport to the OIC and played leading roles at times. Recalling that the OIC was established in 1969 with the goal of saving Masjid al-Aqsa, Al-Quds and Palestine, former President Gül said: “At the time, Muslims’ biggest problem was the occupied status of Masjid al-Aqsa. While it was expected, during the period of nearly half a century that passed since then, that the State of Palestine would be established, unfortunately we are facing today the reality that wars are being fought in Iraq, Syria, Yemen and Libya and unbearable hardships are being endured in those countries.” Stating that the easy way is to accuse others for what is going on the Muslim geography, he said that the causes must be seeked first with the leaders and the regimes in those countries. “No doubt I am saying this as a person who knows very well who are the enemies of Islam, who are the enemies of Turks, who are the enemies of Arabs, but we should first look into ourselves. It is a must to know that those responsible are the rulers, and from there comes the solution." Underlining that the OIC is the second largest organization in the world, Mr. Gül said that great responsibilities befit the OIC in these areas and expressed his belief that H.E. the Secretary General makes great efforts in this direction. Stressing that the OIC’s organs are fulfilling their tasks, Gül said that sucess in political fields nevertheless depends on the governments’ political support.

IRCICA Director General Dr. Halit Eren presented each speaker with a plate of Islamic calligraphy. The ceremony continued with the presentation of their awards and certificates to prize-winners in the 10th International Calligraphy Competition organized by IRCICA which was finalized in May 2016.

Two exhibitions were presented by IRCICA in the ceremony hall: selected award-winning plates from the calligraphy competitions organized from in the past years, and reproductions of historical photographs of the sacred places of Islam, namely Makkah al-Mukaramah, Madina al-Munawara and Al-Quds, selected from the albums of Sultan Abdulhamid II (late 19th-early 20th century) and teh colelction of Fahrettin (Türkkan) Pasha preserevd in IRCICA’s archives.