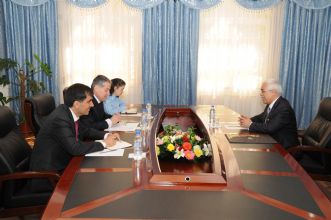 IRCICA Director General Dr. Halit Eren visited the capital Dushanbe at the invitation of the Minister of Foreign Affairs of the Republic of Tajikistan, from 4-7 May 2014. Dr. Eren gave two lectures at the Diplomacy Institute newly established at the Ministry. The first lecture highlighted the role that IRCICA, an international organization representing the Muslim world in cultural platforms, plays in global community. The second lecture focused on the preservation of cultural heritage and the role of international organizations, in particular IRCICA, in this area.

The extensive meeting with the Minister of Foreign Affairs Mr. Aslov Sirodjin Muhridinovich focused on those activities of IRCICA that cover the history and cultures of the OIC’s Central Asian Member States and in particular, the activities relating to or organized jointly with Tajikistan. Preparations for the congress on "Islamic Civilization in Central Asia" to be held in Dushanbe in May 2015 were discussed at length. The congress will be organized jointly by the Ministry of Education and Science of Tajikistan, the Academy of Sciences of Tajikistan affiliated with the Ministry, and IRCICA.

Dr. Eren also met with Mr. Saidov Nuriddin Saidovich, Minister of Education and Science whereby cultural and educational subjects intersecting with IRCICA’s scope of activities were underlined. The objectives and themes of the forthcoming congress on "Islamic Civilization in Central Asia" to be held in 2015 were discussed and finalized.

During the meeting with Dr. Farhad Rahimov, President of the Academy of Sciences of Tajikistan, the themes and modalities of the forthcoming symposium were reviewed. The meeting was also an occasion to discuss possible ways of further expanding the academic cooperation in order to strengthen cultural affinities between Tajikistan and the other OIC Member States.

During the three-day visit Dr. Halit Eren also met with Mr. Abdurahim Kholiqov, Head of the State Committee for Religious Affairs of Tajikistan, and with Mufti Said Mukerrem Abdulkadirzade, Head of the Islamic Centre in the Republic of Tajikistan.