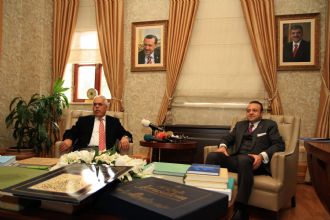 IRCICA Director General Dr. Halit Eren was received by the Turkish Minister for EU Affairs Mr. Egemen Bağış in his office in Ortaköy, Istanbul. A meeting was held where Dr. Eren briefed the Minister about the Centre’s main activity programs. At the end of the meeting, Minister Bağış and Dr. Eren made a press declaration on the talks held. The Minister expressed his appreciation of the Centre’s activities and said “Our dear scholar Dr. Eren gives Turkey pride. He does very successful works for Turkey. As you know IRCICA is a subsidiary center of the Organisation of Islamic Cooperation. IRCICA fulfills a very important role in carrying Turkey’s message of peace to all parts of the world. Turkey’s calls for peace come to the fore at present through IRCICA not only in the Muslim geography but in all corners of the world. We have had a comprehensive meeting with Dr. Halit Eren. We agreed to organize, during the present process of negotiations with the European Union, a congress on the contributions of Islamic civilization to European civilization and to give it continuity afterwards. We will be honoured to organize it.”

As to Dr. Eren, he informed the press representatives on the Centre’s activities, especially its studies on Islamic culture and civilization and their interactions with European culture and civilization. He said that “IRCICA conducts research on Muslim communities in Europe and has joint projects with the Council of Europe. We agreed in principle with H.E. the Minister to organize a congress jointly with the Ministry for EU Affairs to highlight the theme of Cultural Interactions between the Muslim world and Europe.”