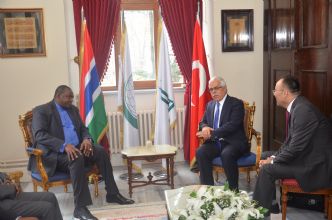 H.E. Adama Barrow, President of the Republic of The Gambia, visited IRCICA on 13 February 2018, within the framework of his state visit to Turkey. The program of the visit started with the welcome at IRCICA Director General Dr. Halit Eren’s office.

President Barrow was accompanied by a delegation comprising Mr. Ousainou Darboe, Minister of Foreign Affairs, International Cooperation and Gambians Abroad, Dr. Isatou Touray, Minister of Regional Integration and Employment, Mr. Habib S. Drammeh, Secretary General and Chief of Public Services at the Presidency, Mr. Kemesseng Jammeh, Ambassador of The Gambia to Turkey, and a number of other high officials from the Presidency of the Republic, Foreign Affairs, Chamber of Commerce and Industry, the Investment and Export Development Board and professionals from various sectors.

The Ambassador of Turkey in The Gambia, Ambassador Sefa Yüceer was present during the visit.

Following the meeting at the Directorate General, Dr. Halit Eren guided the President and his entourage to two exhibitions which were prepared on the occasion in the halls of the Centre: the first exhibition consisted of award winner plates in IRCICA’s calligraphy competitions and the second, historical photographs of Makkah al-Mukarrama, Madina al-Munawwara and Al-Quds selected from the albums of Sultan Abdulhamid II and the collection of Fahreddin Turkkan Pasha.

Dr. Halit Eren gave information to the President and his entourage on the artifacts and publications displayed.

The program continued with the visit to IRCICA Library, where Dr. Eren introduced the President with samples form the library collections and IRCICA’s publications.

Then the President and his entourage were seated in the Conference Hall, where a 10-minute documentary film on IRCICA’s activities was presented.

IRCICA Director General gave a welcoming address in which he said that The Gambia is one of the OIC Member States with which IRCICA’s active cooperation had been going on since longest. Furthermore, The Gambia was represented in the Governing Board of IRCICA for eight years during the 1990s, by Prof. Omar Jah. At the end of his address, as a souvenir of the visit, Dr. Eren presented the President with a calligraphy plate bearing the verse 13 of Sourah 49 (Al-Hujurat) of the Holy Quran which IRCICA adopted as its motto, written by calligrapher Hasan Çelebi: “وَجَعَلْنَاكُمْ شُعُوبًا وَقَبَائِلَ لِتَعَارَفُوا ۚ إِنَّ أَكْرَمَكُمْ عِندَ اللَّهِ أَتْقَاكُمْ ۚ ٌ“

“We ….. made you into nations and tribes that you might get to know one another. Surely the noblest of you in the sight of Allah is he who is the most righteous. Allah is All-Knowledgeable, All-Aware.” (Quran, 49 (Al-Hujurat);13)

Dr. Eren also offered to President Barrow two publications of IRCICA, the first one the facsimile edition of the copy of the Quran attributed to the time of Caliph Othman R.A. which is kept at Topkapı Palace Museum in Istanbul and the second one, the album of historical photographs of Makkah al-Mukarramah and Madina al-Munawara dating from the end of the 19th and early 20th centuries which were selected from the albums of Sultan Abdulhamid the Second and from the collection of Fahrettin Türkkan Pasha, known as Defensor of Medina in World War, preserved in IRCICA Archives.

President Barrow signed the Visitors Book, expressing his pleasure to be visiting the Centre.

President Barrow and Director General Eren paused for a souvenir photo together with the Gambian delegation and the officials of the Centre.