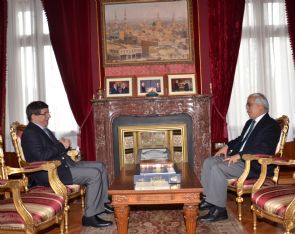 IRCICA was honoured to receive Prof. Ahmet Davutoğlu, Minister of Foreign Affairs of Turkey, at its headquarters on Saturday, 7 January 2012. It was a memorable occasion in the history of IRCICA. IRCICA Director General Dr. Halit Eren briefed the Minister on latest developments recorded in the Centre’s activities. Dr. Eren guided the Minister to the main library at Silahhane (Armoury) building, which was allocated to the Centre by the Turkish Government in 2007 and inaugurated by the Prime Minister of Turkey in 2009 as the fourth building put to the use of Centre within the historical Yıldız Palace complex. In this library, Dr. Eren presented to H.E. the Minister the outcomes of the research projects and activities as they are reflected in the publications of the Centre, the collections and the digital section of the library, the archives of photographs and art works, among others. Emphasis was put on the Centre’s publications, as they result directly from the various projects it carries out on diverse subjects relating to the history of Islamic culture and civilization. Thus Dr. Eren informed Minister Davutoğlu on the activities conducted in the field of Quranic studies, the publication of facsimile editions of the oldest known Mushafs (copies of the Quran), and the studies conducted on the basis of the historical photograph archives, leading to such publications as the album of historical photographs of Al-Quds during the Ottoman period, among others.

At the end of his visit, Prof. Davutoğlu recorded his impressions in the Visitors Book: "I felt great honour and pleasure to visit IRCICA and the new premises of its library from which I had benefited considerably during the period of my academic activities.

Having made important contributions in carrying the deep-rooted heritage and the unique classical works of the Islamic civilization, which encompassed and re-interpreted all the earlier civilizations, to the present world of learning, IRCICA has also won a well-deserved esteem in international academic milieu.

I express my appreciation to all scholars who served in the activities of this institution of ours which also contributes greatly to our country’s cultural heritage, to all its officials, at their head Dr. Halit Eren, and wish them success in their work.