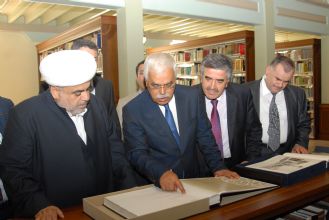 IRCICA Director General Dr. Halit Eren received Sheikh-ul-Islam Paşazade in his office. The focus of the talks was on studies being conducted on the sources of Islamic culture. In this regard Dr. Eren informed the distinguished guest of the Centre’s editions of the oldest known copies of the Holy Quran and its currently preparing an edition of the copy of the Holy Quran that is attributed to Ali bin Abi Talib. Mr. Paşazade praised this work as one that symbolized “a peak of the activities undertaken by this eminent institution.” After the meeting, Dr. Eren told the media representatives present that Sheikh-ul-Islam Paşazade’s and his delegation’s visiting the Centre was a source of honour and that the visit was very important for a review of the past cooperation projects and for launching new ones. Mr. Paşazade said he had visited IRCICA earlier and commended the Centre’s book collections qualifying them as a valuable treasure.

In the afternoon of the same day Sheikh-ul-Islam Paşazade was received by the President of Turkey Abdullah Gül and Prime Minister Erdoğan respectively. He was visiting Turkey at the invitation of the Presidency of Religious Affairs of Turkey.