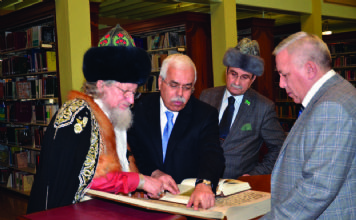 The Grand Mufti of Russia Sheikh-ul-Islam Talgat Tajuddin visited IRCICA on 19 February 2014. IRCICA Director General Dr. Eren and Grand Mufti Tajuddin have known each other for a long time through cultural contacts and participation in multi-faith gatherings. Most recently, at the invitation of Grand Mufti Sheikh-ul-Islam Talgat Tajuddin, Dr. Halit Eren had participated in and addressed the closing session of the conference commemorating the 225th anniversary of the establishment of the Central Spiritual Board of Russia Muslims, which was held in Ufa, Bashkortostan, from 21 to 23 October 2013.