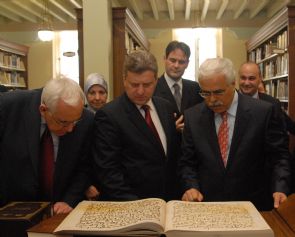 H.E. Mr. Georgy Ivanov, President of the Republic of Macedonia, visited IRCICA on 14 April 2011. This was the first visit of Mr. Ivanov to IRCICA, but he was already acquainted with the Centre’s activities through the cooperation that has been going on for some years between the government and the academic circles of Macedonia on one hand and IRCICA on the other. This cooperation had culminated in the Congress on “Islamic Civilisation in the Balkans” which was organized in Skopje (October 2010) under the patronage of President Ivanov and jointly with the Macedonian Academy of Sciences. President Ivanov had delivered a comprehensive scholarly inaugural address at the congress.

During the meeting at the Centre President Ivanov and Dr. Eren reviewed the follow-up process of the congress including the proceedings which are being prepared for publication in the form of a book. The President was accompanied by Mr. Hadi Nezir, Minister of State, and a delegation of high officials.

Dr. Eren guided the President and his entourage to the library building and briefed them on the collections, the digital library in progress, and the Centre’s research and publications in general.