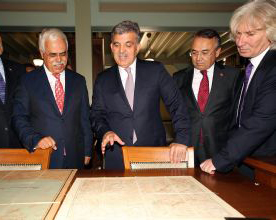 The President of the Republic of Turkey H.E. Abdullah Gül visited IRCICA on 16 September 2011. The President received information on the activities of the Centre and visited its library at Silahhane Building, one of the largest structures of the Yıldız Palace complex. He received information on the modernisation and expansion projects carried out in the library in recent years. IRCICA Director General Dr. Eren briefed the President on the main collections. When he saw samples from the collections of historical maps President Gül spoke of map-making as an important technique that draws from various sciences and recalled that earlier the same morning he had attended the opening of the new academic year at Istanbul Technical University, which was founded in 1773 as an institution concerned with map-making. Dr. Eren also briefed the President on the digital library that the Centre developed under the name “Farabi library” and where the Ottoman Salnames (yearbooks) are loaded. President Gül referred to another documentary collection maintained by IRCICA namely the archive of historical photographs. He recalled his state visit to Japan in 2008 which was accompanied by an exhibition and an album prepared by IRCICA containing photographs of Japanese cities and major events in Japanese-Turkish relations selected from the Yıldız Palace albums dating from the period of Sultan Abdulhamid II. After the library President Gül also saw some other departments of the Centre at Çit Qasr, which houses part of the Centre’s collections of incunabula and rare books.

At the end of his visit President Gül signed the Visitors Book of the Centre: “I am very pleased to visit IRCICA which makes great contributions to studies on Islamic history, culture and art and which we are proud to be the host country. On this occasion I congratulate the Director General of IRCICA Dr. Halit Eren for his praiseworthy works and wish him continual success.” He received the plaque of gratitude which was presented by Dr. Eren for the patronage, support and assistance graciously extended to the Centre.